Albuquerque’s Duke City Marathon celebrates its 39th annual running this year, a scenic road race that takes runners along the banks of the Rio Grande and features a full marathon, marathon relay, 10K and 5K in addition to the half marathon.

Named to commemorate the city’s founding, when it was settled and named for the Spanish Duke of Albuquerque in 1706, the race is a combination of urban city streets and pathways through lush, green parks, offering a variety of terrain and scenery along the course.

The half marathon shares the same course as the full marathon, starting at Civic Plaza downtown on 3rd & Tijeras Streets.

From there, the course unfolds along Central Avenue and tree-lined Laguna Boulevard, taking runners past Robinson Park and the Rio Grande Zoological Park before turning onto the path along the river for the rest of the course, which also runs by the Botanical Garden and the Paseo del Bosque Recreation Trail and bicycle path.

Once half-marathon participants reach the Rio Grande Nature Center at Candelaria Street, they turn around and begin the trek back to the finish line, retracing the course exactly in reverse.

The course features gentle elevation changes, as the race is a long, gently sloping uphill for the first half of the race (and a corresponding downhill in the second half).

The half marathon and 5K events are open to both runners and walkers, and the event also hosts the New Mexico Cancer Center Miracle Mile, added in 2007 to celebrate the lives of cancer survivors as well as to remember those who have lost their battle with cancer. 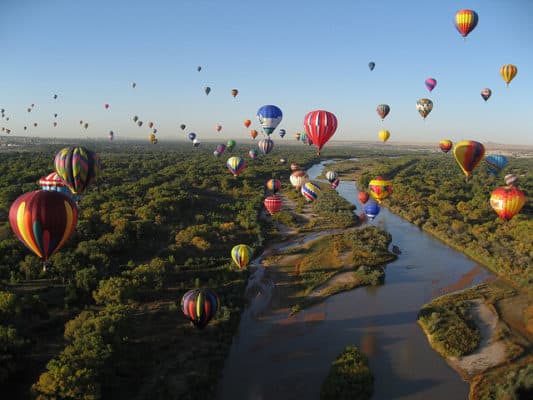 View of the annual Balloon Festival in Albuquerque, New Mexico. (Photo by Larry and Linda/flickr)

The month of October brings milder and often cooler weather to the Albuquerque area, as this month has brought record temperatures here as low as 21°F (in 1991) and as high as 91°F (in 1979). The city is typically dry this time of year (as it is year-round), and averages 1 inch of rainfall for the month.

See the race route map for the Duke City Half Marathon.

To reserve your spot in the 2023 running of Albuquerque’s Duke City Marathon, Half Marathon, 10K or 5K race, register online at the event website here.

Ever run in the Duke City Half Marathon? Share your impressions here, or post your review in the Comments below.