Officially titled the United Airlines NYC Half Marathon, this race celebrates its 14th annual running this year, a race that brings more than 20,000 runners onto the streets of Manhattan for the race, which begins at the northern entrance to Prospect Park and ends on Central Park’s West Drive after a counterclockwise loop around the park.


From there, the race takes the field along Flatbush Avenue in Brooklyn, then across the Manhattan Bridge and along FDR Drive toward Times Square. The last five miles of the race take runners north toward Central Park, making a loop around the park before crossing the finish line at 75th Street.

A few years back, this runner was in the back of the pack and everyone was in good spirits at the start of the race, waiting for the start. From my perspective, it seemed completely well-organized and smooth (there were plenty of porta-potties with no long lines that I could see at the start, and stations of them at several points along the course), and got off without a hitch.

If you’re planning on running the race, you need to know there are some pretty hilly stretches (although with a high of 125 feet and a low of sea level, the hills are never too difficult). The last four miles take you all through Central Park, from the 7th Avenue entrance all the way around the park in a counter-clockwise loop that brings you to the finish line at 75th Street.

Since it’s the spring, the scenery is a lot less green and lush than it would be in the summer — the leaves aren’t yet on the trees, but that lets you see more of the buildings, museums and high rises along the route through the park. And it’s winding and hilly through the park, with some switchback-style turns near the north end of the park. 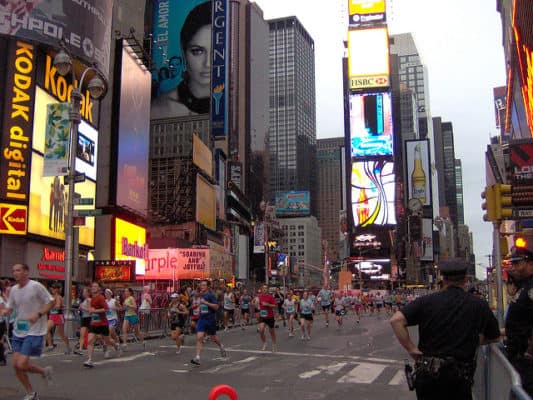 But before the hills in the park, after you pass about the mile 7 marker and then head out into the city, down 42nd Street and into Times Square. This stretch is all downhill, a nice reprieve that lets you take in everything. I can’t stress enough how cool it is, after the gleaming towers and lights of Times Square, then to run into the trees and rocks and hills of Central Park.

For 2018, the course was redesigned so that the race goes from Brooklyn’s Prospect Park to Manhattan’s Central Park, taking runners on a long stretch along FDR Drive after crossing the Manhattan Bridge.

There’s several small bands out there playing, plus what must have been a race volunteer (or just an enthusiastic onlooker!) who was out at several points in the race cheering everyone on, telling the women runners “hey ladies, look — you’ve just stopped traffic!” He must have been speeding by bike from location to location, because we no doubt saw him at like 4 points along the route. 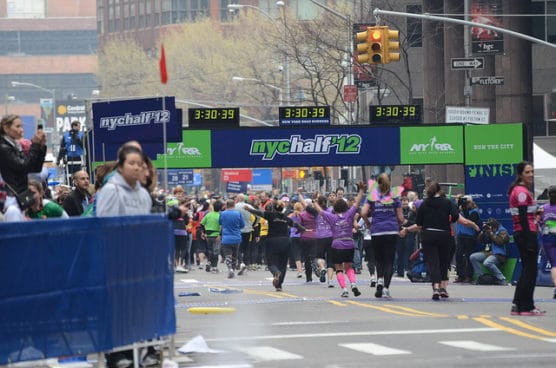 Set for its annual early springtime running just a few days before the first day of spring, the New York City Half Marathon is likely to have cool and perhaps even quite cold weather conditions, based on past weather averages for this time of year.

To reserve your spot in the 2022 running of the New York Road Runners’ New York City Half Marathon, enter your application at the race website here.

Ever run in the New York City Half Marathon? Share your impressions here, or post your review in the Comments box below.