Featuring a scenic out-and-back course along the West River Parkway in New York’s Beaver Island State Park along the U.S.-Canadian border, the Grand Island Half Marathon & 10K is among the state’s smaller half-marathon events, typically fielding between 300 and 400 runners each year.

The course follows a route through the park made up entirely of paved park roadways and takes participants through a mixture of parkland areas and nearby residential neighborhoods.

As it is run through a park with plentiful hills, the race course features a number of uphill and downhill stretches, but no major changes in elevation.

The starting and finish lines are in the 950-acre Beaver Island State Park, which lies just on the southern end of Grand Island near the upper part of the Niagara River.

With its beach and marina areas, the park is a local favorite for swimming, boating and fishing, and also has ample nature and hiking trails as well as 18-hole courses for both disc (frisbee) golf and the kind played at Augusta National every year. 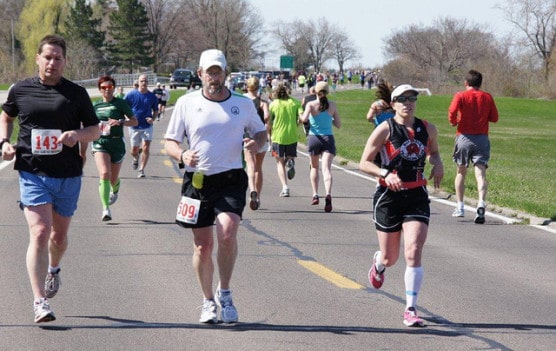 Runners at the 2011 Grand Island Half Marathon. (Photo by Buffalo Triathlon Club/flickr)

Located along the U.S.-Canada border in western New York state, about 12 miles north of Buffalo and roughly 400 miles northwest of New York City, Grand Island typically sees cool to mild weather in May, which has brought record temperatures here as low as 28°F (in 2004) and as high as 88°F (in 1991).

See the race route map for the Grand Island Half Marathon here.

To reserve your spot in the 2023 running of the Greater Buffalo Track Club’s Grand Island Half Marathon or 10K race, register online at RunSignUp.com here.

Ever run in the Grand Island Half Marathon? Share your impressions here, or post your review in the Comments below.