You’ll run among the roads and forest trails of New York’s Adirondack Mountains at the Old Forge Half Marathon, which like the full marathon and 5K unfolds along an out-and-back course that starts and finishes just north of this tiny hamlet that’s home to less than 1,000 people here in upstate New York.


One of a series of races organized by Willow Health & Wellness Center that take place in the area throughout the year, the Old Forge races start near the George T. Hiltebrant Recreation Center on North Street, just north of the village itself and the Enchanted Forest Water Safari park.

From there, the course unfolds north along North Street and Carter Road, where you’ll turn left and begin a big looping stretch that will take you around the northern end of Little Safford Lake and past Clear Pond, along a combination of mostly gravel and dirt roads.

Don’t expect huge hills here — the highest point on the course tops out at just over 1,840 feet above sea level, while the lowest lies at about 1,713 feet. There are plentiful rolling hills throughout the half marathon route, but no big changes in elevation to speak of.

The trails you’ll be running along serve as snowmobile trails in the winter and biking and hiking trails in the summer, and the final few miles of the race will bring you through the woods between Lake Rondaxe and Old Forge.

The half marathon takes place on Friday afternoon and on Saturday morning (you’ll choose your day while registering), while the other events take place over the course of the weekend. The half marathon course will close after 3 hours, 45 minutes on Friday and after 5 hours on Saturday, so you’ll have plenty of time to complete your 13.1 miles — organizers plan to place 6 aid stations out on the course, two of which will have Gatorade, they add.

The full marathon route will continue on toward East Bay, and then head back to Old Forge for the race finish along with the half marathon and 5K. 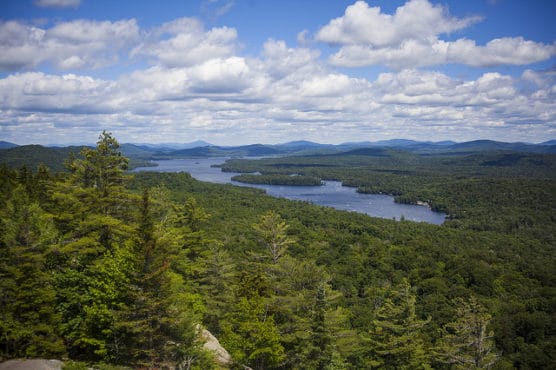 A view of the Old Forge, N.Y., area from Bald Mountain. (Photo by Kyle/flickr)

Nestled among the Adirondacks of upstate New York, about 140 miles northwest of Albany and roughly a five-hour drive north from New York City, Old Forge typically sees some of its mildest weather of the year in September, which brings temperatures between the mid-40s and the mid-60s, and the area’s second-wettest month of the year.

See the race route map for the Old Forge Half Marathon here.

To reserve your spot in the 2022 running of the Old Forge Marathon, Half Marathon or 5K race, register online at RunSignUp.com here.

Ever run in the Old Forge Half Marathon? Share your impressions here, as well as anything you learned about the race that you think other runners/walkers should know.