Set for its 10th annual running here in this small city in northern New York state, less than an hour’s drive from the Canadian border, the Plattsburgh Half Marathon and two-person half marathon team relay — added to the race in 2012 — now welcome about 1,000 runners each year.


The race takes runners on an out-and-back tour of Plattsburgh, a city of about 20,000 residents here along Cumberland Bay, on the northern shore of Lake Champlain that divides New York and Vermont.

The starting line for the race overlooks the lakeshore from the U.S. Oval Historic District, a onetime former U.S. Army barracks that today is listed on the National Register of Historic Places, and where its officers’ quarters, hospital, barracks buildings, chapel and parade ground still stand.

Runners leave the U.S. Oval heading south from the race start, running along the road around the oval and then onto Ohio Road and Nevada Oval before turning onto the Terry James Gordon biking, walking and running path, which keeps runners along the lakefront for the first two to three miles of the race.

Next, runners turn left onto Jay Street and then onto Bridge Street, which they’ll follow over the Saranac River into the city and onto the campus of SUNY-Empire State College.

The race then makes what is roughly a clockwise loop through the city, heading through the Empire State College campus, past Blumette Park and through downtown Plattsburgh before heading back toward the lakeshore for a stretch along Cumberland Avenue, which will feature views of Cumberland Head peninsula off in the distance across the bay. 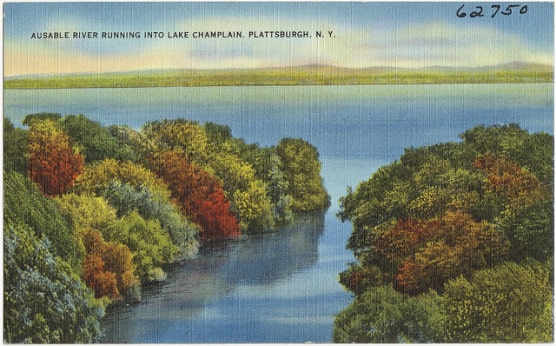 Nestled along the shoreline of Lake Champlain’s Cumberland Bay, just miles from the U.S.-Canadian border and roughly 310 miles north of New York City, Plattsburgh typically sees cool to mild weather in May, a month that has brought record temperatures here as low as 25 degrees (in 1966) and as high as 94 degrees (in 1979).

See the race route map for the Plattsburgh Half Marathon here.

To reserve your spot in the 2019 running of the Plattsburgh Half Marathon or 2-person Relay race, register online at Zippyreg.com here.

Ever run in the Plattsburgh Half Marathon? Share your impressions here, or post your review in the Comments below.