Runners get the chance to trek through the streets and along the riverfront of one of western North Carolina’s most picturesque cities at Hickory’s annual Charity Chase Half Marathon, which marks its 17th annual running in the heart of spring, after last year’s race that saw just over 300 runners cross the finish line.

The race got its start in 2006 as an effort by the Hickory Jaycees to raise money for the locally based NC Jaycees Burn Center, and saw just over 200 runners complete the event, raising an estimated $6,000 in donations for the burn center.

Today, the number of runners taking part in the race has more than doubled, as have the donations received, which are distributed to all of the charities and nonprofit organizations that volunteer for the race each year.

Visitors to this part of western North Carolina may already be familiar with its importance to the furniture industry, as the Hickory Furniture Mart has been a mecca for shoppers for decades, and helped build the city, which now is home to more than 40,000 residents.

The course for the race begins and ends in downtown Hickory at Union Square, with a 7:00 AM starting time — as the race organizers put it, “just as the sun is coming up.” From there, the course takes runners north through the city, past Oakwood Cemetery and later through the campus of Lenoir-Rhyne University before coming back into downtown along Main Avenue.

The race finish line lies back where runners started the race at Union Square, and runners will have a course time limit of 4 hours to complete the race’s 13.1 miles. 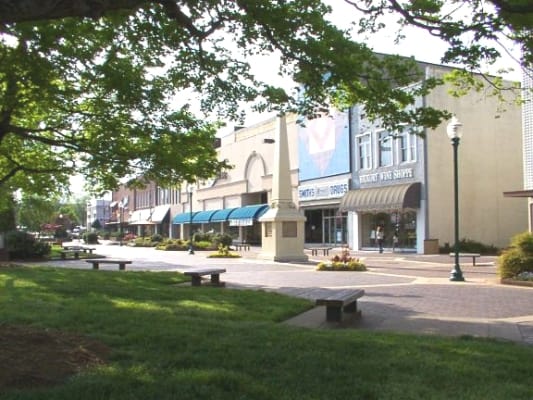 Nestled among the foothills of the Appalachian Mountains in western North Carolina, about 55 miles northwest of Charlotte and roughly 190 miles east of Knoxville, Tenn., Hickory typically sees mild weather in April, with moderate precipitation all year long.

See the race route map for the Charity Chase Half Marathon here.

To reserve your spot in the spring 2023 running of Hickory’s Charity Chase Half Marathon, register online at RunSignUp.com here.

Ever run in the Charity Chase Half Marathon? Share your experience here, or post your review in the Comments below.