Windy and quite cool conditions often greet runners at the annual late winter running of Morehead City’s Crystal Coast Half Marathon, 10K & 5K, which sees a few hundred runners and wheelchair competitors cross the finish line in all races combined each year.


The race featuring views of the waters of both Bogue Sound and the Atlantic Ocean, from the stretches of the race that unfold along the waterfront as well as from the bridge that crosses over the causeway between Morehead City and Atlantic Beach.

From the starting line on Morehead City’s Arendell Street, the out-and-back course takes runners on a loop through Morehead City’s downtown streets for the race’s first few miles, giving spectators plenty of chances to see their friends and family running the course in the early going.

Once runners have passed through the mile 4 marker on Evans Street, they begin the section of the course that takes them over the Atlantic Beach Causeway to the area by the same name, along Fort Macon Road in the direction of this area’s historic Fort Macon, the Civil War battlefield site that commemorates the battle that took place here in 1862.

After hitting the turnaround point at Sea Spray, just before the entrance to the Ft. Macon State Park area, runners then head back along the highway toward the causeway bridge, where they cross over once again and head toward the finish line back on Arendell Street.

Runners who take part in the Crystal Coast Half, whose proceeds go to benefit the United Way of Coastal Carolina, are invited to sign up for the two additional half marathon events that make up the Blue Cross & Blue Shield of North Carolina Half Marathon Series. 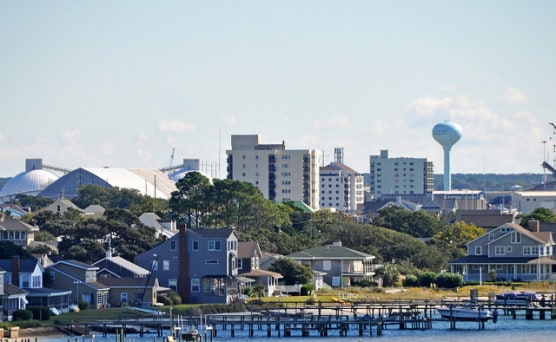 Nestled along the area known as North Carolina’s Crystal Coast, which lies about 100 miles northeast of Wilmington and just south of the island chain that makes up the Outer Banks, Morehead City typically experiences cool to mild weather in the late winter season.

See the race route map for the Crystal Coast Half Marathon here.

To reserve your spot in the 2021 running of Morehead City’s Crystal Coast Half Marathon or 5K race, register online at RunSignUp.com here.

Ever run in the Crystal Coast Half Marathon? Share your impressions here, or post your review in the Comments below.