Paved mountain roads and wide gravel trails that wind through the majestic wooded forests of North Carolina’s Black Mountain area, which lies near the southern edge of the 510,000-acre Pisgah National Forest, are the setting for this annual late spring/early summer race.

It’s the Downhill @ Dawn Half Marathon, a race hosted by both the Nashville Striders running club and the Ridgecrest Conference Center, a Christian retreat here in western North Carolina.

The point-to-point race starts quite literally as dawn is rising over the North Carolina mountains, at 6:01 AM to be exact, and takes runners from the starting line at the Ridgecrest Conference Center campus, between the center’s Royal Gorge Apartments and its Maple Hotel.

From there, runners follow the first few miles of the race out onto paved roads that wind between Ridgecrest and the nearby town of Black Mountain a few miles to the west, following old Highway 70 on a slight downhill for the first two miles.

Runners will cross train tracks in the early going, and can expect to hear train whistles blowing through as these are active railroads, in which case they’ll need to wait a few minutes for the train to pass.

Miles 3 and 4 feature an uphill climb back to the Ridgecrest campus, after which runners then begin the next several miles through the forest roads and gravel trails, which unfold along a gradual downhill slope for the stretch through miles 5 through 9.

This stretch of the race is perhaps its most naturally beautiful, as runners make their way along the winding Highway 70 through the mountains, passing by Old Geyser Park as well as mountain streams and rivers alongside the roads and trails heading downward from Old Fort Mountain, which changes from paved to gravel trails through this stretch.

Don’t be surprised if you even hear cowbells in the distance or close by the race course, as mountain goats wearing the bells are common sight through these hills.

The route changes back from gravel to paved roads as Highway 70 nears the intersection with Mill Creek Road, and then takes runners in for the last few miles into the town of Old Fort, where runners finish the race at the Old Fort Baptist Church on East Main Street, and where shuttles will be waiting to bring runners back to the Ridgecrest campus.

In keeping with the theme of the day, the race begins with a prayer at the starting line, and is followed by sessions on faith and testimony after the race. 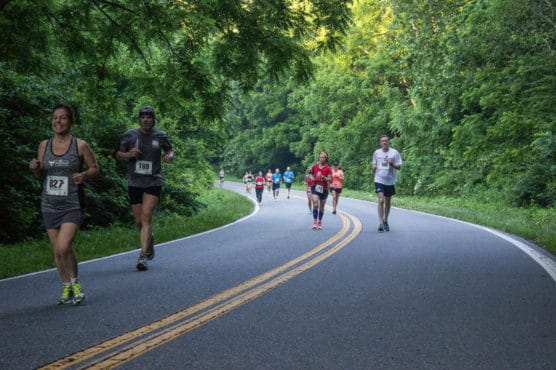 Located in western North Carolina about 18 miles west of Asheville, within a day’s drive of Great Smoky Mountains National Park to the west and the Pisgah National Forest to the north, Ridgecrest typically experiences some of its mildest weather of the year in late May, which has brought record temperatures here as low as 26°F (in 1989) and as high as 90°F (in 1977).

See the race route map for the Downhill @ Dawn Half Marathon here.

$80 and up for the half marathon

To reserve your spot in the summer 2022 running of the Downhill @ Dawn Half Marathon, register online at Enmotive.com here.

Ever run in the Downhill @ Dawn Half Marathon? Share your impressions here, or post your review in the Comments below.