Run as a benefit for the South Brunswick Interchurch Council Food Pantry in southeastern North Carolina, a non-denominational nonprofit organization that distributes food and assistance to those in need in the Ocean Isle Beach and surrounding areas, the Ocean Isle Beach Bridge Run For Food hosts a half marathon, 10K and 5K that make their 15th annual running in 2018.

The race saw around 400 runners cross the finish line at the race’s 2016 running, with an estimated 200 finishers in the event’s half marathon race alone.

The race begins on West 3rd Street in Ocean Isle Beach, and takes runners on an out-and-back course that crosses the Odell Williamson Bridge over the intracoastal waterway twice, once over to the mainland and then back again over to Ocean Isle Beach.

The bridge portion of the race route offers by far its biggest uphill and downhill stretch; the remainder of the race’s 13.1 miles feature largely fast and flat paved roads through the Ocean Isle Beach area.

Runners start the race at 9:00 AM at the starting line on West 3rd Street, and get a chance to see both the calm, peaceful waters of the Intracoastal waterway over the bridge as well as the waves crashing against the shore in from the Atlantic Ocean, during the stretches of the run along Ocean Isle Beach. 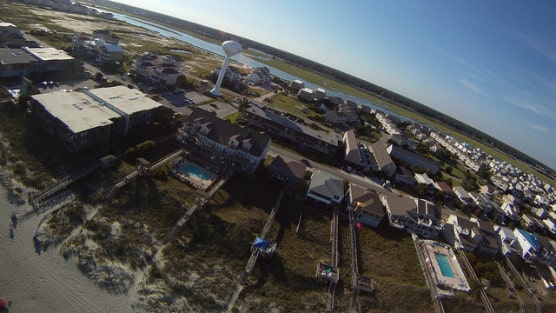 An aerial view of Ocean Isle Beach, North Carolina, in 2010. (Photo by tortxof/flickr)

Nestled along North Carolina’s southern coastline, just over 40 miles northeast of South Carolina’s Myrtle Beach and roughly 40 miles southwest of Wilmington, the town of Ocean Isle Beach typically sees mild to cool and sometimes cold weather conditions in the mid-winter season, and its heaviest precipitation of the winter during the month the race is held.

In January, temperatures average between 33°F and 56°F — on the day of the race (Jan. 13), the average low is 33°F and the average high is 55°F — while precipitation amounts average just under 4 inches for the month.

To reserve your spot in the winter 2019 running of the half marathon, 10K or 5K at the Ocean Isle Beach Bridge Run for Food, register online at RaceEntry.com here.

Ever run in the Ocean Isle Bridge Run? Share your impressions here, or post your review in the Comments below.