Set for its 12th annual running overall — and its 8th with the half marathon distance — the Ocracoke Island Weekend Runfest features a 5K and 10K race on Saturday and the half marathon on Sunday, which will take runners along a course that spans the length of this tiny island here at the southernmost end of North Carolina’s Outer Banks.

You’ll get to run through a small piece of the nation’s maritime history here on Ocracoke, where the legendary pirate Blackbeard died and which is also home to the Watermen of Ocracoke, the fishermen, clammers, crabbers, oyster fishers and waterfowl hunters who have worked and lived here for hundreds of years.

It’s also home to the Ocracoke Island Lighthouse, which is just a few stories high but still towers over most of the buildings in the nearby town. It’s the second-oldest lighthouse in operation anywhere in the United States, and its light can be seen at night from more than a dozen miles away in nearby Pamlico Sound and the Atlantic.

This stretch unfolds past the Ocracoke Island Airport and continues all the way out to the National Park Service campground, where you’ll make a loop around the roadway and then turn back onto Irvin Garrish for second half of the race back to the airport, and back into downtown Ocracoke. 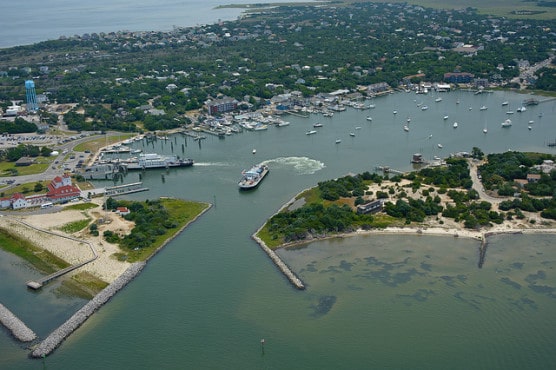 After the fast and flat out-and-back stretch — and the course through this area as well as most of the rest of the island is pancake-flat, as the elevation never rises above about 5 feet above sea level — they’ll head into the village, where they’ll make several turns through neighborhoods in and around the village, including a run out toward the lighthouse along Lighthouse Road and Loop Road, and then around the harbor known as Silver Lake.

This stretch also unfolds past the British Cemetery, the final resting place of four British Royal Navy soldiers whose bodies floated to the Ocracoke shore in 1942, and whose grounds are now maintained by the U.S. Coast Guard. A few more neighborhood turns later, and runners will cross the finish line at Gaffer’s.

While you’re on the island for the race, don’t miss some of its most historic sites, like the British Cemetery that’s home to the final resting place for British soldiers who washed ashore after the Germans sank a number of British ships off the coast of Ocracoke during World War II. A British flag still flies over the cemetery there.

You’ll also want to plan your trip ahead of time to Ocracoke, as it’s not easy to get to this very remote island — there are no bridges here, so it’s accessible only by private boat, plane or one of its three public ferry boats.

Nestled near the southern end of North Carolina’s Outer Banks, Ocracoke typically sees some of its drier weather in April, where temperatures typically range from the high-40s to the mid-60s.

See the race route map for the Ocracoke Island Half Marathon here.

To reserve your spot in the 2023 running of the Ocracoke Island Half Marathon, 5K or 10K race, register online at RunSignUp.com here.

Ever run in the Ocracoke Island Half Marathon? Share your impressions here, or post your review in the Comments below.