The race takes runners on an out-and-back loop through the City of Oaks, as Raleigh is sometimes called for the plentiful oak trees that line the streets in the city’s downtown.

From the starting line on West South Street, in front of the Duke Energy Center for the Performing Arts and just a couple of blocks from the Raleigh Convention Center, runners head north through downtown to start the race.

After running north through the city and then south along Balfour, the course heads out of downtown, passing by Chavis Park and the Historic Oakwood Cemetery, which lies right next door to St. Augustine’s College. That’s followed by stretches past the campuses of William Peace University and North Carolina State University, and then a long stretch that parallels Rocky Branch Creek, along Western Boulevard.

The final few miles of the half marathon race bring runners back toward downtown Raleigh, and feature a fairly steep uphill stretch between miles 11 and 12, as runners are passing within sight of Project Enlightenment Park on Lenoir Street.

After that, the course mostly flattens out for the last couple of miles, as runners head east on Hillsborough toward the State Capitol building and then turn onto Fayetteville Street for the home stretch into the finish line.

The course time limit for the half marathon is 4 hours; for the full marathon it is 7 hours — so the race is open to both runners and walkers. 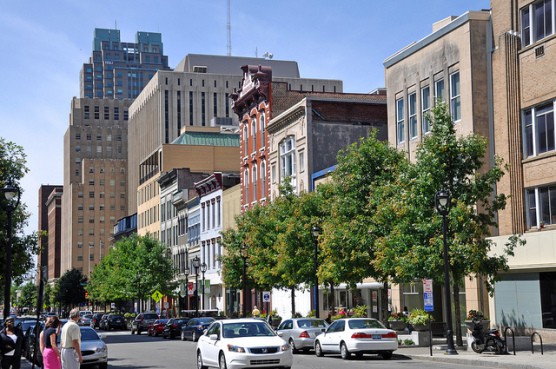 Located in the region of central North Carolina known as the Research Triangle, just over 160 miles northeast of Charlotte, Raleigh typically sees mild to moderately warm weather in April, a month that has brought record temperatures as low as 30 degrees (in 1996) and as high as 95 degrees (in 1999).

To reserve your spot in the spring 2018 running of the Rock ‘n’ Roll Raleigh Marathon or Half Marathon race, register online at the event website.

Ever run in the Rock ‘n’ Roll Raleigh Half Marathon? Share your impressions here, or post your review in the Comments box below.