The Scream Half Marathon

As the race organizers stress in describing this race, you’re likely going to be very, very sore the day after you finish the 13.1 miles between Jonas Ridge and Mortimer, N.C., that make up the Scream Half Marathon, as the elevation drops more than 2,000 feet from the start to the finish line.

The scenery for the race is among the most beautiful you can find anywhere in the western North Carolina mountains, as the event takes place inside the Pisgah National Forest, whose more than 500,000 acres lie near the southern end of the Appalachian Mountains, just east of Great Smoky Mountains National Park.

About 2 1/2 miles of the course at the start of the race takes place on paved roads, while the rest is made up of dirt and gravel service roads through the hills and mountains of the Pisgah forest.

Runners will start the race in the tiny town of Jonas Ridge, which lies at about 3,800 feet above sea level and whose main road features a post office and a fire department surrounded by cabins and mountain homes tucked into the hills all around.

From the starting line in front of the post office, runners will then follow the winding Mortimer Road north from Jonas Ridge, starting a long, gradual descent that will continue mostly uninterrupted — with just a couple of uphill exceptions — for the next 13.1 miles.

Once the race route reaches mile 3, the road changes to Old Mortimer Road and then to National Forest Road and Pineola Road over the next few miles, as it turns from heading north to heading eastward in the direction of Mortimer, an old ghost town that once was home to as many as 800 residents.

In the early 1940s, however, the town flooded and was later abandoned. Today, remnants of the old mining town it once was are still around, including an old cotton mill and a number of old buildings.

At about the mid-way point of the race, what has been a winding course filled with numerous turns becomes a long straightaway stretch for about the next 2 1/2 miles, and includes the only real hills along the course.

Once runners have reached the mile 9 marker, the course then begins twisting and turning through the hills once again, and continues its gradual descent along Edgemont Road toward Mortimer for the race finish.

Read a review and see photos from the 2012 race at Old-Runner.com. 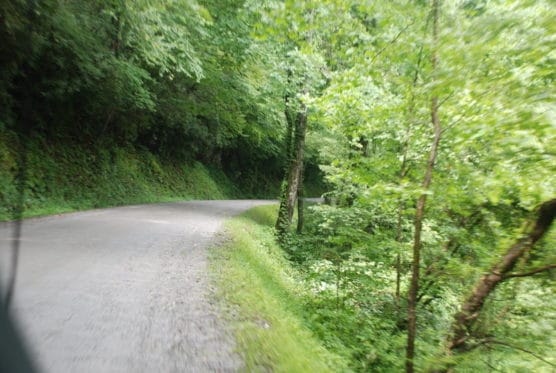 Located in what is known as the High Country of western North Carolina, just over 60 miles northeast of Asheville, Jonas Ridge (where the race starts) typically sees its warmest and wettest weather of the year in July, which has brought record temperatures here as low as 47°F (in 1961) and as high as 104°F (in 1954).

See the race route map for the Scream Half Marathon here.

To reserve your spot in the 2023 running of Jonas Ridge’s The Scream Half Marathon, visit the event website below.

Ever run in The Scream Half Marathon? Share your impressions here, or post your review in the Comments below.