The green, tree-covered hills and mountains of western North Carolina’s Nantahala National Forest rise all around the valley that is home to the campus of Western Carolina University, where the springtime running of Cullowhee’s Catamount Climb Half Marathon (known as the Valley of the Lilies Half Marathon until January 2021) is set to take runners on an out-and-back tour of the campus and its nearby mountain communities.

From the starting line on campus just off University Way, near WCU’s Balsam Residence Hall, runners will start the race by heading out through campus onto Killian Building Lane, followed by a loop around Central Drive, Buzzard’s Roost Road and Memorial Drive, along a stretch that brings runners past the university’s Hunter Library and its Natural Sciences Building.

The first few miles wind along the university roads, in and around campus academic buildings, residence halls and recreation centers, with an out-and-back stretch along Norton Road before heading down toward the intramural fields and Cullowhee Presbyterian Church.

Once runners pass the mile 3 marker and make the turn onto Forest Hills Road, they then back toward campus and Central Drive, where they turn again and head south toward Old Cullowhee Road.

The next stretch of the race, which lasts for roughly the next four miles, includes some of its most scenic miles as it takes runners right along the winding path of the Tuckasegee River that winds through town.

Runners make their way along the snake-lake route of Edgewater Road, following the path of the river for miles 5 through 9, after which runners head off onto Culowhee Road and then onto Highway 107, where they turn right and head west in the direction of Forest Hills.

The final few miles bring runners back toward the campus right back to where they started — at the finish line near the student residence hall. Runners will experience the race’s steepest hill during the last three miles around the mile 10 marker, as they make their way up 107 toward Forest Hills, but with the gorgeous green natural beauty of the Blue Ridge Mountains all around in the background.

Hosted and sponsored by the university’s Department of Campus Recreation & Wellness and its School of Health Sciences, the race also serves as a fundraiser to support student travel to conferences in wide range of academic fields, to assist with the expense of traveling to cities so students can engage with professionals working in their subject areas. 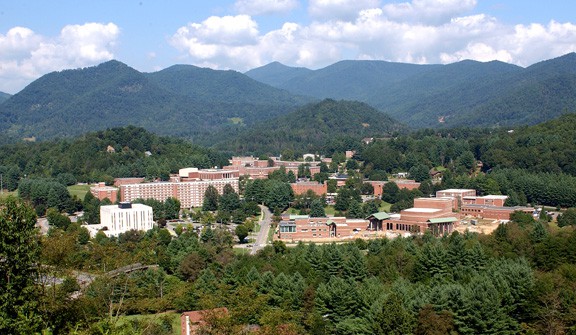 Nestled among the mountainous region of western North Carolina, in the midst of the Nantahala National Forest and just over 50 miles southwest of Asheville, Cullowhee typically sees still quite cool weather and has one of its driest months of the year in April.

See the race route map for the Catamount Climb Half Marathon here.

To reserve your spot in the 2023 running of Cullowhee’s Catamount Climb Half Marathon or 5K race, register online at RunSignUp.com here.

Ever run in the Catamount Climb Half Marathon? Share your impressions here, or post your review in the Comments below.