Organized by the Cleveland West Road Runners, a local running club based in and around the Cleveland metropolitan area, this race is the second of two “classic” half-marathon events the group stages each year, one in the spring and one in the fall.


The Cleveland Fall Classic Half Marathon & 5K follows exactly the same course as the spring event, a winding, out-and-back route along the Valley Parkway inside the Mill Stream Run Reservation, part of the city’s Cleveland Metroparks system of parks and green spaces throughout the metro area.

The course for the fall classic starts and finishes at the Bonnie Park picnic area within Mill Stream Run, which visitors can reach via the Pearl Road exit off Interstate 71 just outside Cleveland.

From the starting line at the corner of Albion Road and Cleveland Metropark Drive (which becomes Valley Parkway), runners follow the winding parkway in a southeasterly direction, running over the paved-surface road through the park’s wooded forest areas and along several bends along the banks of the Rocky River, which flows through the park.

When they reach the intersection with Highway 82 — Royalton Road — runners then begin the trek back toward the starting line, and run the course they’ve just run along the Valley Parkway in reverse.

The race is a double-loop course, meaning that participants will have to complete the course twice to finish the full 13.1 miles of the half marathon, so when they reach the starting line, it’s time to start again and head back down Cleveland Metropark Drive along the river, and then back again.

If you have time while you’re in Strongsville and are an outdoor enthusiast, the Mill Stream Run park has a lot to offer — especially if you run the spring version of the event, when the season for trout fishing along the Rocky River is at its peak.

There’s also plenty of scenery to distract you along the course during the race, from the local wildflowers, trees and wildlife to the remnants and artifacts of life along the river in centuries past, reaching all the way back to the native Americans long before settlers ever set foot in the area. 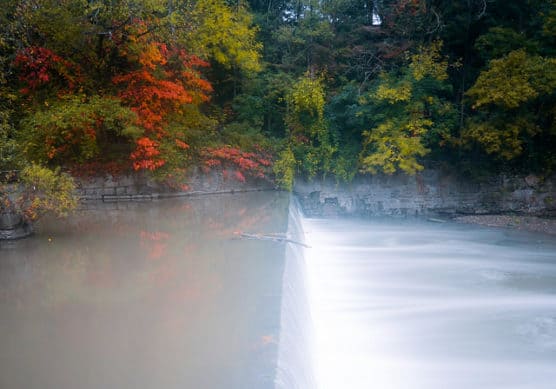 Located about 15 miles southwest of the nearby Cleveland metropolitan area, the town of Strongsville tends to see chilly to quite cold temperatures in the early autumn, with fairly even rainfall & precipitation throughout the year.

In November, temperatures average between 35°F and 49°F, while precipitation amounts average just under 3.4 inches for the month. On the day of the race (Nov. 21), the average low is 34°F and the average high is 47°F.

See the race route map for the Cleveland Fall Classic Half Marathon here.

Registration for this event has not yet opened. To reserve your spot in the 2020 running of Strongsville’s Cleveland Fall Classic Half Marathon or 5K race, visit the event website for the latest updates.

Ever run in the Cleveland Fall Classic Half? Share your impressions here, or post your review in the Comments below.