One of a series of northern Ohio races called the “rat races,” sponsored by the Elyria, Ohio-based NCN Racing, the Columbia Station Half Marathon & Inline Skating event takes runners on an out-and-back course through the area known to locals as the Columbia Township, which lies just to the southwest of Cleveland in the state’s Lorain County.


Fast and largely relatively flat — though it includes some long, rolling hills — the course takes runners and skaters on a tour of the country scenery around Ohio’s first township west of the Cuyahoga River, founded in 1807.

The (mostly) loop course for the race starts and finishes at the town’s Copopa Elementary School on West River Road in Columbia Station.

From there, the course takes participants southward along the same road all the way to Akins Road, where runners then turn right (west) for a brief stretch and then left (south) again on Station Road, where the begin the next couple of miles toward the township of Valley City.

Once they hit Crocker Road, participants then turn east and then north again on West River Road, making the first of two loops they’ll make around the Crocker Airport.

Once runners make it back to Akins Road, they turn left and make the same Akins-Station-Crocker Road loop a second time, and then head north back along West River Road toward Copopa Elementary for the race finish.

The race is also part of the Columbia Homecoming Festival, a weekend-long series of events sponsored by the Columbia Township Chamber of Commerce, that begins with a community pig roast on Thursday night and culminates with a fireworks celebration on Sunday evening, and includes a “battle of the bands,” pie & cake contest, car show, parade, beauty contest and watermelon eating contest (and a lot more) in between.

Along the way throughout the race, both runners and inline skaters will see some of the northern Ohio region’s most scenic countryside, as much of the course — especially its long, “winding” straightaway second half — unfolds along the bends of the Rocky River, which is your constant companion over your right shoulder along the race course from Valley City all the way back up to Columbia Station. 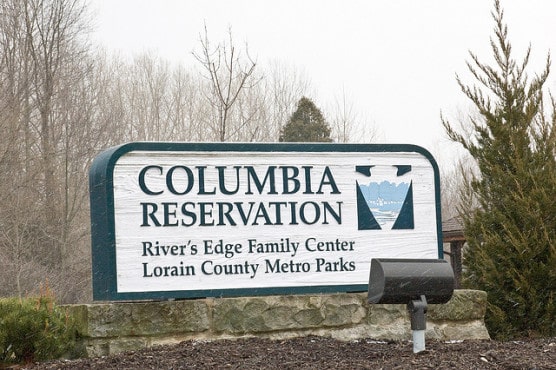 The entrance to Columbia Reservation, a park near the race course. (Photo by Andrew Bardwell/flickr)

One of several small Ohio townships located in Lorain County, just outside the Cleveland metro area, Columbia Station tends to see mild to quite warm weather in the early summer, as well as some of the local area’s wettest weather of the year.

See the race route map for the Columbia Station Half Marathon here.

To reserve your spot in the 2016 running of the Columbia Station Half Marathon or Inline Skating event, register online at the event website here.

Ever run in the Columbia Station Half Marathon? Share your impressions here, or post your review in the Comments below.