Touted by race organizers as one of the most popular races of its kind in the country for first-time marathoners and half-marathon runners — due to its mostly flat terrain for the first half of the course — the Cincinnati Flying Pig Marathon, Half Marathon, 10K & 5K is one of those races that lives up to its promise to “welcome runners of all abilities.”

The race starts not far from the finish line, in downtown Cincinnati along West Mehring Way, overlooking the waters of the Ohio River right in front of Paul Brown Stadium, home of the National Football League’s Cincinnati Bengals.

From there, the course winds through downtown, crossing the river twice between Ohio and northern Kentucky — first over the Taylor Southgate Bridge and next over the Clay Wade Bailey Bridge — all while maintaining a mostly flat route for the first five miles of the race.

The course takes the field past a number of the city’s most important sports landmarks along the early downtown part of the course, including the remains of the old Riverfront Stadium (where Major League Baseball’s Cincinnati Reds formerly played, and where Pete Rose knocked his legendary 4,192nd hit in September 1985) as well as the new stadium where the Reds now play, the Great American Ballpark.

After staying mostly steady at an elevation of around 500 feet above sea level from the starting line through the mile 5 marker at Plum Street, the course then begins a long, stair-step-style incline over the next three miles that organizers call “the Climb,” rising to about 800 feet above sea level by the time runners reach the eighth mile marker.

Along these miles, the course takes participants around and through hilly Eden Park, a 186-acre green space right in the center of the city that is also home to the city’s Cincinnati Art Museum and Art Academy, as well as the Krohn Observatory.

On their way through the tree-lined park, runners and walkers also make their way past Mirror Lake in the center of the park, before exiting back into the more urban areas of town for the last few miles to the finish line, which lies on Pete Rose Way near Yeatman’s Cove Park on the banks of the river.

The last three miles of the race — all of which is run on paved surfaces, and are considered the easiest section of the race — give back nearly all of the elevation gain of the middle section of the course, falling back to about 500 feet above sea level by the finish line. 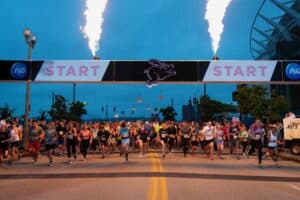 Nestled along a bend in the Ohio River in the southwestern corner of the state, Cincinnati typically sees mild to chilly weather in the early spring with moderate precipitation all year long.

See the race route map for the Flying Pig Half Marathon here.

To reserve your spot in the 2023 running of Cincinnati’s Flying Pig Marathon, Half Marathon, 10K or 5K race, register online at RaceRoster.com here.

See more races in: May, Ohio