Set for its 3rd annual running, the Run & Ride races at Kings Island — which include the Kings Island Half Marathon, the Banshee 10K and the Glow Run 5K — take runners through this 364-acre theme park located just over a 20-minute drive from Cincinnati, billed as the “largest amusement and waterpark in the Midwest.”


For runners in the half marathon, the race will feature a double loop course through the park, including stretches that unfold past the park’s signature replica of the Eiffel Tower (about one-third the size of the original in Paris) as well as the all-new Banshee roller coaster that opened in April 2014, the Diamondback roller coaster and the Beast, which opened in 1979 and is still the world’s longest wooden roller coaster.

Most of the race course is fast and flat, and it’s all run on paved surfaces throughout Paramount-owned theme park, which opened its doors in 1972 and originally was designed as a way to promote and expand nearby Coney Island, a smaller theme park and resort on the Ohio River. Today, the park boasts more than 30 roller coasters and a 33-acre water park.

The only real hills runners can expect to encounter occur between miles 3 and 5, as runners are making their way between the part of the park known as the “Action Zone” and “Dinosaurs Alive,” an animatronic dinosaur themed area where kids can dig for fossils.

This is also where they’ll see those same hills a second time, as runners in the half marathon will make two loops along the same course (10K runners will make this loop a single time).

Both the half marathon and quarter marathon races will be run on Sunday morning, while the 5K race will take place on Friday night. 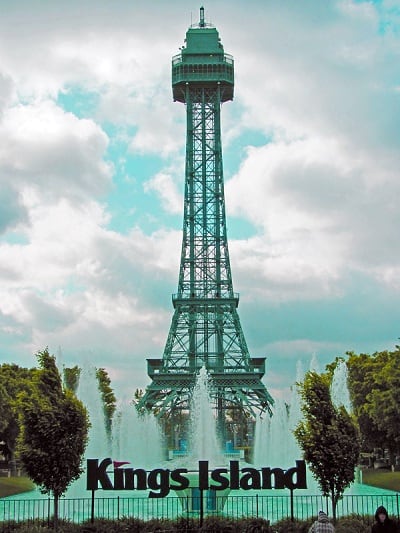 The entrance to Kings Island Amusement Park. (Photo by Wikimedia)

Located near the corner of southwestern Ohio,  just over 20 miles northeast of downtown Cincinnati, Mason typically sees October temperatures that average between 41ºF and 68ºF, while rainfall totals average just over 3.1 inches, making this one of Mason’s driest months of the year.

To reserve your spot in the 2017 running of Kings Island’s Run & Ride Half Marathon, 10K or 5K race, register online at RunSignUp.com here.

Ever run in the Run & Ride Kings Island Half Marathon? Share your impressions here, as well as anything you learned about the race that you think other runners/walkers should know.