More than 5,500 runners, walkers and wheelchair competitors crossed the finish line each year — including more than 4,000 finishers in the half marathon — at the autumn running of Tulsa’s Williams Route 66 Marathon, Half Marathon, Relay, 5K & 1-Mile Fun Run, which unfolds for a scenic tour of the city’s downtown as well as its parks along the Arkansas River.

Fast and mostly flat, and run entirely on paved surfaces through Tulsa’s city streets and along portions of its River Parks pathways, this point-to-point race starts at the corner of 7th and Main Street. From there, runners first head into the neighborhoods just to the south and west of downtown, past Maple Park and around Swan Lake in the early miles, on the way toward the campus of Cascia Hall School and the Philbrook Museum.

The half marathon route continues around East 29th Street and Rockford Road as it makes its way around the museum park grounds, and the hills — which are more frequent in the first half of the 13.1-mile race — begin to taper off as the course flattens out in the middle miles and especially in the second half of the race.

Between mile markers 5 and 6, the course begins a downhill stretch that takes runners through tree-lined Woodward Park, and then heads into more residential streets along Owasso Place and Woodward Boulevard.

Runners pass the midway point of the half marathon in the southward stretch along Woodward, and it’s along here that the course really begins to flatten out, and remain flat for nearly all of the rest of the way in to the finish line along Cameron.

Until they get there, runners get to enjoy long, flat stretches along Riverside Drive and South Peoria Avenue, which takes runners along a street filled with shops, restaurants and entertainment between miles 7 and 9. Once runners reach East 41st Street, they make a right turn and head back toward the river, where they’ll stay on Riverside Drive for most of the rest of the race.

The final miles of the course unfold entirely along the river, as runners make a left onto Riverside from East 41st and head north all the way down to the bridge at Southwest Boulevard, which is part of the famous Route 66. Here runners cross the bridge to the other side, then turn around and head north on the final uphill stretch to the finish line at Guthrie Green.

Those running the full marathon will share the same route as the half marathoners for nearly all of the 13.1-mile race until they reach Denver Avenue, where the 26.2-milers will split off and continue east for the remainder of their race.

The scheduled starting time for both the full and the half marathons is 8:00 AM, and organizers note that while all runners and walkers will have 7 1/2 hours to complete the race, the half marathon course will be closed to traffic for 3 1/4 hours; after that time, cars will be allowed on the roads again, so slower runners and walkers will need to remain cautious if they’re still on the course after that time. 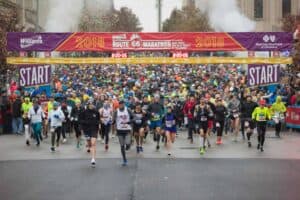 Nestled along the Arkansas River in northeastern Oklahoma, about 100 miles northeast of Oklahoma City, Tulsa typically sees November temperatures that average between 39°F and 60°F, while rainfall totals average just under 3.5 inches for the month.

See the race route map for the Route 66 Half Marathon here.

To reserve your spot in the 2023 running of the Williams Route 66 Marathon, Half Marathon, Relay or 5K race, register online at HakuApp.com here.

When is the Route 66 Marathon & Half Marathon?

Sunday November 19, 2023 with a starting time of 8:00 AM for both half and full marathon runners.

How much does it cost to run the Route 66 Marathon & Half Marathon?

The race costs around $110 for the half marathon and $125 for the full marathon.

How many runners participate in the Route 66 Marathon & Half Marathon?

Around 10,000 runners participate in the race annually.