Runners get a chance to trek through Oregon’s “Emerald City” at the annual Eugene Marathon, Half Marathon & 5K, which takes participants through, around and past several of the city’s urban parks, the campus of the University of Oregon and across the Willamette River, which winds its way through the heart of the city.

Open to both runners and walkers, the race also includes a kids marathon, in which children who’ve completed 25.2 miles over the weeks leading up to the race will get to run the final mile of their marathon in downtown Eugene.

From the starting line in Alton Baker Park just south of Autzen Staedium, the 13.1-mile half marathon starts out taking runners across the Willamette River along Coburg Road before heading into downtown Eugene.

Next, runners head east through downtown Eugene and around the University of Oregon campus before heading away from the campus and south toward the Amazon Parkway.

The course continues south along the Amazon Parkway, which skirts the western edge of Amazon Park, whose 90 acres feature running and walking trails along Amazon Creek as well as softball fields, open greenspace and restored wetland areas. They’ll follow the parkway south toward Snell Street, then head north along the other side of the parkway.

They’ll continue north along Hilyard Street before retracing their previous steps along the eastern part of the University of Oregon’s campus.

From there, it’s north along the footbridge, bringing runners into Alton Baker Park, which is perhaps the most scenic section of the race, as the beauty of the park’s roughly 400 acres are on display, with plenty of ponds, big green lawns and walking and running trails.

Runners follow the roads through the park and cross the finish at Autzen Stadium’s 50-yard line. 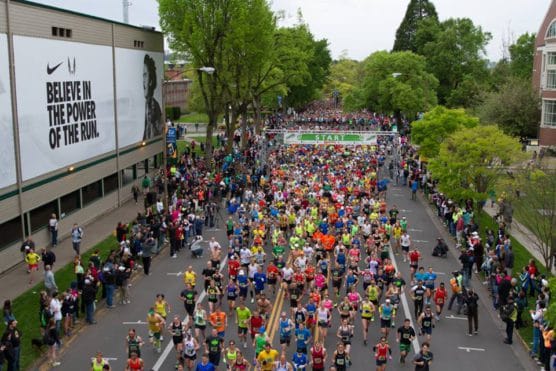 Located in the west-central part of the state, about 40 miles from Oregon’s Pacific coastline and just over 110 miles south of Portland, Eugene typically enjoys some of its mildest weather of the year in April, which has brought record temperatures here as low as 25ºF (in 1936) and as high as 89ºF (in 1926).

Eugene Half Marathon Past Results

To reserve your spot in the 2023 running of the Marathon, Half Marathon or 5K race, register online at Active.com here.