Known for its wide sandy beaches, majestic evergreen forests and peaceful pace of life here along Oregon’s stretch of the Pacific coastline — which has earned it recognition as one of the country’s top places to retire — the central Oregon coastal town of Lincoln City plays host in 2018 to the 10th annual running of its Lincoln City Half Marathon and 10K.


Run on an out-and-back loop course that takes runners along rural country roads, densely wooded forest areas, and through meadows and streams, the race starts and finishes at Taft High School, just south of Lincoln City.

This part of the Oregon coast features some of the west coast’s most dramatic natural beauty, and its stretches through Oregon are no exception. Following the start at the park, runners make their way along a combination of paved, two-lane rural roads with plenty of rolling hills, and some sections of the course are run on gravel surfaces.

The race is open to both runners and walkers, who are encourage to start their race at 8:00 AM, an hour ahead of the 9:00 AM starting time for runners in the half marathon. Water and refreshments will provided along the course, the organizers add, and runners can pick up their race packets on the morning of the race.

Here’s what past Lincoln City Half runner Mike Balmer had to say about the 2011 race: “This is a beautiful run. At least has for the past 2 years. Lots of forest trees and creeks. If you think its on the beach. Think again. I am running it again.” 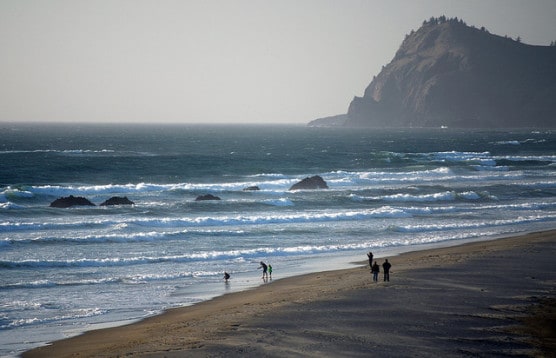 The coastline near Lincoln City, Oregon. (Photo by EyeMindSoul/flickr)

Nestled along the central Oregon coast here in the northwestern part of the state, roughly 90 miles southwest of Portland, Lincoln City typically sees cool and occasionally cold weather in early April, when average monthly temperatures range between the mid-40s and high-50s, and precipitation totals average just over 1.3 inches.

See the race route map for the Lincoln City Half Marathon here.

To reserve your spot in the 2020 running of the Lincoln City Half Marathon or 10K race, register online at GetMeRegistered.com here.

Ever run in the Lincoln City Half Marathon? Share your impressions here, or post your review in the Comments below.