A gorgeous run along the Pacific Ocean and the banks of the Yaquina River, a (possibly!) haunted lighthouse, a “splendid variety of views and scenery, wildlife and shipping, fishermen and crabbers” — you’ll find all that and more at the Newport Marathon & Half Marathon presented by Oregon Coast Bank, a race known for its fast, flat course where organizers say almost half of the people running it set new personal record times each year.

Start at Yaquina Bay State Park. You’ll start the race on the grounds of this state park that sits at the northern end of Yaquina Bay, where the bay meets the Pacific Ocean. This is where you’ll get to take in the park’s famous lighthouse, which was built in 1871 and has served over the years as a lighthouse, a barracks for construction workers building a nearby jetty, and today is open to the public.

It’s long been rumored to be haunted, as the United States Lighthouse Society notes in this piece on the Yaquina Bay lighthouse:

Abandoned and neglected as the years passed, the lighthouse developed a ghostly appearance. It also picked up some ghostly legends to match its look. An 1899 article by Lischen M. Miller in the Pacific Monthly helped the rumors along. “Of an afternoon when the fog comes drifting in from the sea,” she wrote, “and completely envelopes the lighthouse, and then stops in its course as if its object had been attained, it is the loneliest place in the world. At such times those who chance to be in the vicinity hear a moaning sound like the cry of one in pain, and sometimes a frenzied call for help pierces the death-like stillness of the waning day.”

From there, you’ll head north and run through some of Newport’s residential neighborhoods, stretches that feature only gentle hills — most of the course, organizers note, is very flat thanks to its location at just over 60 feet above sea level.

You’ll follow this part of the course as it snakes along the riverside for the next 5-plus miles, passing by the Hatfield Marine Science Center across the river and the river estuary between miles 6 and 8.

At about the mile 8.7 point, you’ve reached the turnaround point, and then will head back along the route you’ve just run in reverse, all the way back to the finish line near Embarcadero Center, where Southeast Moore Drive meets Southeast Bay Boulevard. 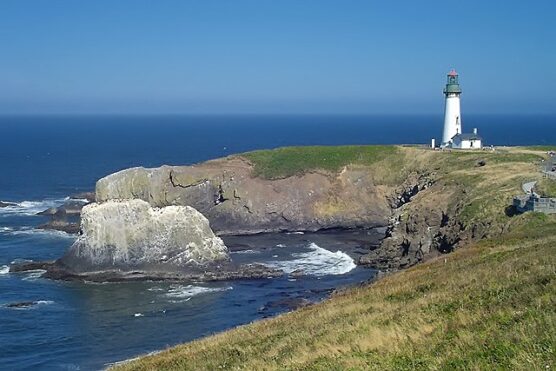 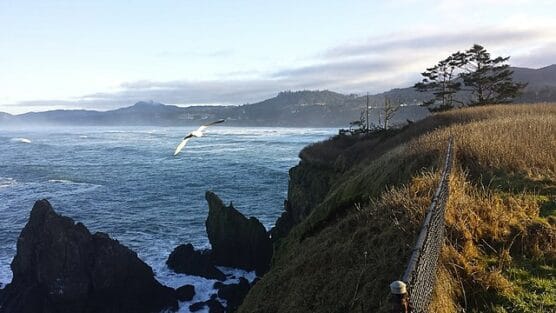 Nestled along Oregon’s central coast, roughly 130 miles from Portland and about 95 miles from Eugene, Newport typically experiences cool to mild temperatures in June (though the weather here can be unpredictable this time of year), with about 7 days with rainfall during the month.

See the race route map for the Newport Half Marathon here.

To reserve your spot in the 2023 running of the Newport Marathon or Half Marathon, register online at GetMeRegistered.com here.

Ever run in the Newport Half Marathon? Share your impressions here, especially anything about the course/terrain you think other runners might want to know.