You’ll get to run the beautifully scenic streets and riverside parkways of Oregon’s largest city at its flagship Portland Marathon & Half Marathon, which makes its 51st annual running this fall along an loop course that’s been called the “Best Race in October” by no less than Runner’s World magazine in recent years.

Mostly flat, with a few hilly stretches. The race begins in downtown Portland along Southwest Salmon Street, next to Waterfront Park. From there, you’ll turn left onto Southwest 1st Avenue and head south. You’ll remain on 1st Avenue until it meets up with Naito Parkway, which you’ll follow all the way under the Portland Aerial Tram and across the South Waterfront on Macadam Avenue.

There, you’ll continue for the next few miles along a fast, flat, and tree-lined stretch of South Portland before crossing the Sellwood Bridge and entering the Sellwood-Moreland neighborhood.

By the time runners enter Brooklyn, the race is over halfway done, and the course isn’t quite as flat as it used to be (although any hills here are still minor). But the course does continue with a few turns north along the river for a flat stretch along the Eastbank Esplanade as the course continues north toward the second (and final) bridge crossing of the course.

After crossing the Burnside Bridge and returning to the west side of the river, it’s smooth sailing for the last mile all the way back to the finish line at Waterfront Park.

Open to runners and walkers. Organizers welcome both runners and walkers to take part in the race, but note that if you fall behind a pace of 15 minutes per mile, at 1:00 PM they will ask walkers to move to the “off-street” course, which means you’ll run/walk on the sidewalk for the rest of the race. 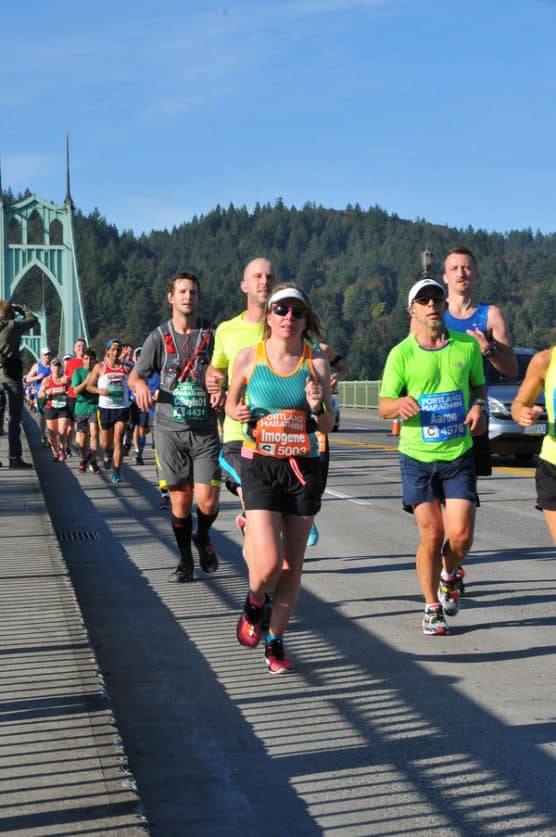 Nestled in Oregon’s Willamette Valley region along the banks of the river by the same name, Portland typically sees chilly to mild weather in October, which brings temperatures that average between the mid-40s and the mid-60s. The area usually sees warm, dry summers and cool, rainy winters, so the seasons are beginning to change when the race is held.

See the race route map for the Portland Half Marathon here.

When is the Portland Marathon?

How much does the Portland Marathon cost?

How many people run the Portland Marathon?

Over 7,000 runners participate in the Portland Marathon.