Runners get a chance to make their way through the Roaring River valley here in northwestern Oregon, along a route filled with views of the mountains all around as well as the river that gives the race its name, at the Roaring Run Half Marathon, 10K, 5K and one-mile dash races, which are run as a benefit for the cross country running program at Lebanon High School.


The race starts and finishes at Roaring River County Park, a 28-acre park that’s a popular spot for fishing, with its access to both the creek and its own fishing pond, as well as miles of hiking trails.

The park lies about 10 miles southeast of Scio and about an hour’s drive south from Salem; the race is open to both runners and walkers and features a 9:00 AM starting time for the half marathon (half-marathoners may also choose the early start, at 8:30 AM).

Like those running the 10K and the 5K, runners in the half marathon will start by leaving the park and heading east on Fish Hatchery Drive, for a quick out-and-back stretch that covers the first mile.

Once they pass by the park on their left, runners keep heading west along the road toward Larwood Drive, where they’ll turn right and head north, passing by Larwood Wayside County Park along the way.

The next stretch of the race, which is really the main part of the half marathon, features a loop that takes runners in a counter-clockwise direction around the valley that surrounds the river, along Larwood Drive on the northern side of the river and Oupor Drive along its southern side.

Throughout this stretch, which feels mostly flat but actually is a very gradual downhill and uphill through the middle miles of the race, runners will pass by rolling fields and horse farms, and finish the loop by running through the historic Larwood Covered Bridge.

Built back in 1939, the bridge spans more than 100 feet across Crabtree Creek and is one of a number of covered bridges located here in the Scio region of Oregon’s Willamette Valley.

Once runners make it across the creek under the cover of the bridge, they make the turn back onto Fish Hatchery Drive, and then head back toward Roaring River park for the race finish line. 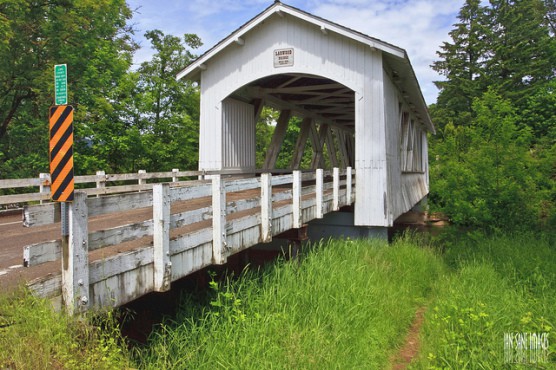 Located along the winding Thomas Creek in northwestern Oregon, about 25 miles southeast of Salem and roughly 70 miles south of Portland, Scio typically sees its wettest weather in the winter months, and has seen record temperatures in February as low as 7 degrees (in 1989) and as high as 72 degrees (in 1963).

See the race route map for the Roaring River Half Marathon here.

To reserve your spot in the late winter 2020 running of the Roaring Run Half Marathon, 10K or 5K race, register online at RunSignUp.com here.

Ever run in the Roaring Run Half Marathon? Share your impressions here, or post your review in the Comments box below.