Known for a course that takes runners over rolling hills along the country roads just outside this small southern Pennsylvania borough, the Chambersburg Half Marathon has become a running tradition here as it is set to mark its 45th running in 2023.

Designed in part as a tune-up run for the Boston Marathon, which takes place usually three to four weeks after the race each year, the Chambersburg Half Marathon also is run in honor of the late local runner Robert Eyer, who helped found the locally based Chambersburg Road Runners Club and who actually passed away while running in 2001. This half marathon, organizers note, was his favorite race to run.

As for the race course itself, the Chambersburg Half follows an out-and-back course that starts and finishes on the southeastern edge of the borough, near the intersection of McKinley Street and Memorial Drive.

From there, runners head southeast into the rural farm fields outside of town, running the first few miles along Stanley Avenue, Cider Press Road, Henry Lane and Springview Road — where, near the mile 3 marker, runners reach the race’s steepest hill.

Once runners make their way all the way south to Newcomer Road — in the form of what roughly looks like an upside-down lollipop — they make a loop around Newcomer and New Franklin Road, with a quick out-and-back stretch along Sollenberger Drive.

After turning back onto College Road, runners then head around the top part of the loop and then back onto Springview, where they run the route they ran earlier, in the opposite direction this time, back toward the finish line.

While they’re in town, participants as well as their friends and family have plenty of opportunities to take in museums and monuments to the history that’s taken place in Chambersburg, from the John Brown House (where the abolitionist leader stayed to plan his attack on Harpers Ferry, Va., in 1859) to sites commemorating the borough’s involvement in historical episodes ranging from the Whiskey Rebellion to the Civil War. 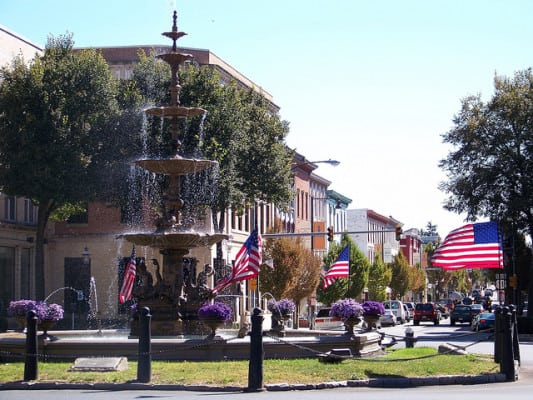 Nestled in a valley near the Appalachian Mountains here in southern central Pennsylvania, just over 12 miles north of the state line with Maryland and about 160 miles east of Pittsburgh, Chambersburg’s weather can still be quite cold this time of year.

On race day (March 18), the average low is 27ºF and the average high is 48ºF, and the area sees an average of nearly 6 inches of snow for the month.

See the race route map for the Chambersburg Half Marathon here.

To reserve your spot in the 2023 running of the Chambersburg Half Marathon, register online at the event website here.

Ever run in the Chambersburg Half Marathon? Share your impressions here, or post your review in the Comments below.