A few years ago marked the first time in nearly four decades that Potter County’s annual God’s Country Marathon included a half marathon race, on a course that features a big uphill followed by an equally big downhill in the second half of the race, and begins at Ski Denton in Denton Hill State Park.

During the winter months, skiers can enjoy 22 trails covering an entire range of skill levels. When the snow melts, the park changes gears and is a great destination for bikers, hikers, and of course, runners. But the ski lifts are not an option for runners as the tagline of God’s Country Half Marathon is “conquer the hill,” a nod to the ascent that racers will make approximately two miles into the race.

Aside from a quick turnaround in the first couple miles, runners will get to see something new with each mile as this course is point-to-point. Lining up at the Ski Denton entrance after a shuttle bus ride, racers will begin the first two miles apart from the full marathoners.

Traveling along Route 6, the course travels east until the U-turn marker sends them back to meet up with the full marathoners at the beginning of the hill. Climbing up to an elevation of 2,424 feet above sea level, the course takes approximately three miles to climb over 700 feet.

It’s all downhill after the mile 5 marker. For the remaining eight miles, runners will enjoy a gentle descent of over 800 feet. The course heads due west along Route 6 and towards Coudersport. Route 6 is the second longest highway in the United States and stretches from Bishop, California to Provincetown, Massachusetts. It is also called the Grand Army of the Republic Highway, a name bestowed to honor American Civil War veterans.

There are a few rolling hills to contend with after mile 5, but racers can feel confident after climbing the hill. Runners can easily rehydrate as water stations are at nearly each mile marker.

The peaceful countryside of Potter’s County makes for beautiful scenery along the race. Signs of a more populated area begin to pop up as racers near Charles Cole Memorial Hospital near mile 11. Past mile marker 12, racers exit Route 6 and make a left turn onto Park Avenue. 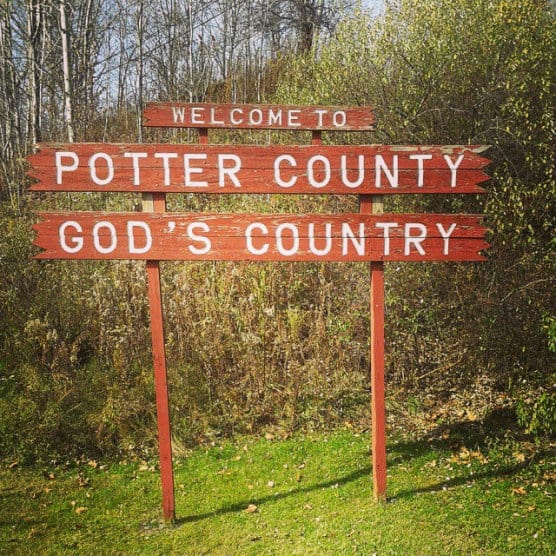 A quick left on Mill Street and a quick right on Allegheny Avenue will bring them close to the home stretch. At the Main Street intersection, runners make a right turn and head north towards the finish line. Stick around after the race for the awards ceremony.

Located in central northern Pennsylvania, about 165 miles northeast of Pittsburgh and roughly 270 miles northwest of Philadelphia, Coudersport typically sees its wettest weather of the year in June, a month that has brought record temperatures as low as 26 degrees (in 1958) and as high as 90 degrees (in 1971).

See the race route map for the God’s Country Half Marathon here.

To reserve your spot in the 2023 running of Coudersport’s God’s Country Marathon or Half Marathon race, register online at Active.com here.

Ever run in this half marathon? Share your impressions here, or post your review in the Comments below.