Added to Philadelphia’s flagship marathon event for the first time in 2006, the Philadelphia Half Marathon has become nearly as popular as its older, 26.2-mile counterpart, with just over 12,700 finishers in the 13.1-mile race out of a total of more than 24,000 runners, walkers and wheelchair athletes who crossed the finish line in all three distances combined at the 2016 race.

It’s easy to understand why when you get a look at the course, which literally takes runners on a tour through American history.

From the starting line near the Philadelphia Museum of Art, at the intersection of 22nd Street and the Benjamin Franklin Parkway, runners head south and east into downtown and the section of Philadelphia known as the Old City, which features some of its most important historical landmarks like the Liberty Bell and Independence Hall, where the Declaration of Independence and the U.S. Constitution were debated and ultimately approved.

This stretch of the race runs through Independence National Historical Park, a stretch of several blocks with sites that played key roles in the American Revolution.

Runners will make their way past the park both in the first couple of miles and around the 9 mile mark of the race, and in between they’ll head out for a run along the Delaware River, along Columbus Boulevard. That’s followed by stretches along Washington Ave and Front Street.

Following the 6th mile mark, runners will turn off of 13th street and onto Walnut St. which will take them across the river and onto 33rd St. Following on 33rd St. for a mile, the course takes runners back into the park and across the river once again on Girard Ave. The course remains in the park for the last 3 miles of the race, passing the Rockland Mansion and Stone Age in America Statue at the 12 mile mark

Runners will stay on park paths, and finish the race just before the starting line outside the Philadelphia Art Museum. The half marathon and 8K both take place on Saturday, followed by the full marathon on Sunday.

All entrants are welcome and encouraged to participate as long as they can keep a pace of 16 minutes per mile or better, which means the race is open to runners, walkers and wheelchair competitors. 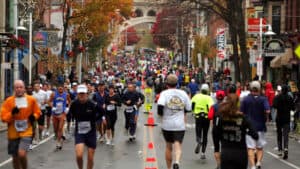 Located along the Delaware and Schuylkill Rivers in eastern Pennsylvania, about 95 miles southwest of New York City and roughly 130 miles northeast of Washington, D.C., Philadelphia typically sees November temperatures that average between 40°F and 55°F, while rainfall totals average just over 3.1 inches for the month.

See the race route map for the Philadelphia Half Marathon here.

To reserve your spot in the 2023 running of the Philadelphia Half Marathon, register online at RaceRoster.com here.