Set for its 11th annual running this year, the Rock & Roll Philadelphia Half Marathon sees more than 15,000 runners cross the finish line each year, at a race that unfolds largely along the banks of the Schuylkill River.


In fact, the race atmosphere had been pretty close to that of the Rock ‘n’ Roll themed marathons and half marathons around the country already, as the event had rock and roll bands and musicians stationed on stages along the race’s 13.1 miles in recent years, along the Benjamin Franklin Parkway.

The race welcomes both runners and walkers for its out-and-back 13.1-mile course, which starts and finishes near the Eakins Oval, which lies just a stone’s throw from the Philadelphia Museum of Art.

From there, runners first follow a roughly four-mile loop through Philadelphia’s downtown district that takes them past local landmarks like City Hall, the headquarters of the American Philosophical Society and Philadelphia’s Washington Square, where runners then turn left and head along Arch Street back toward the Oval for the next stretch of the course along the river.

It’s along this stretch of the course that the race shows off some of the city’s most scenic areas, as runners make their way along the both the southern bank of the Schuykill River, along Martin Luther King Jr. Drive, and then along its northern bank after crossing over the river at the Falls Bridge, after which they follow Kelly Drive back southward toward the Museum of Art to the race finish line, just past the Oval.

The race is largely fast and flat with few hills to speak of — participants will experience very few changes in elevation, as the course starts at 35 feet above sea level and rises to its highest point at about 55 feet.

Throughout the course, runners and walkers are treated to numerous scenic city views, especially on the portions of the route that run alongside the Schuylkill River and both the east and west sections of serene Fairmount Park. 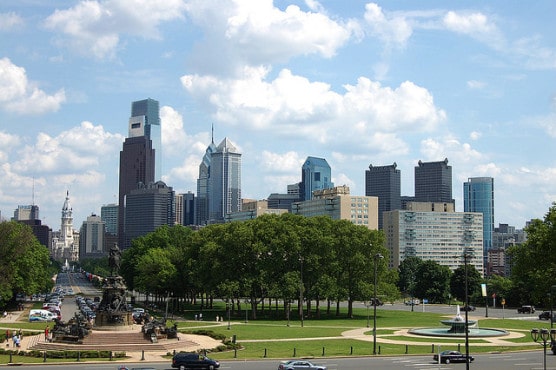 The view from the steps of the Philadelphia Art Museum, where the race finishes. (Photo by Rebecca Wilson/flickr)

Located near the confluence of the Schuykill and Delaware Rivers in southeastern Pennsylvania, just under 100 miles southwest of New York City, Philadelphia typically sees mild to cool weather in September, which has brought record temperatures here as low as 35°F (in 1963) and as high as 102°F (in 1881).

See the race route map for the Rock & Roll Philadelphia Half Marathon here.

To reserve your spot in the 20200 running of the Rock ‘n’ Roll Philadelphia Half Marathon, register online at Active.com here.

Ever run in the Rock ‘n’ Roll Philly Half? Share your impressions here, or post your review in the Comments below.