On the edge of Amish country in southern Pennsylvania, in this small town that bills itself as the “Antiques Capital of the USA,” runners will get the chance to tour both the German-style village and the rolling hills of the countryside just outside Adamstown at the Rumspringa Half Marathon, set for its 5th annual running in 2016.


The race is part of a series of running events hosted and organized in this part of Pennsylvania throughout the year by Uberendurance Sports, which also stages the “1/2 Sauer, 1/2 Kraut” Half Marathon in June and the Sloppy Cuckoo Trail Half Marathon in September in nearby Philadelphia.

As the organizers themselves describe it, “we do cater to a certain type of runner, one who does not need a glitzy expo, a shiny medal… rock bands or a celebrity telling them how awesome they are.”

Instead, they focus on getting runners out into the country air and on a hilly and often challenging route that features plenty of pastoral scenery and plenty of German-themed refreshments at the aid stations and at the post-race festival, where runners will each get a free Stoudts beer after the race, courtesy of the award-winning Stoudts Brewery.

They also plan to raffle a German cuckoo clock and give German weather houses as the awards to each of the age group winners — and a cuckoo whistle to every finisher, instead of a race medal. 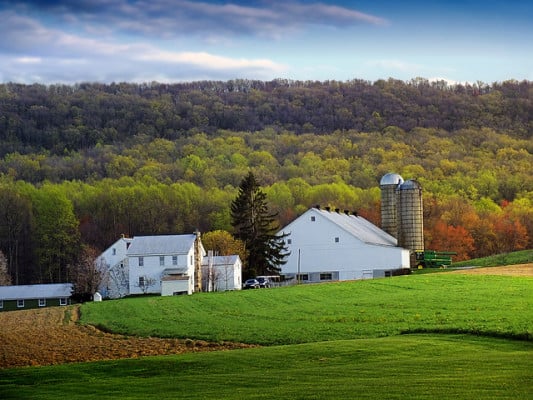 The scenery in Lancaster County, Pennsylvania. (Photo by Nicholas Tonelli/flickr)

Located in southeastern Pennsylvania, about 10 miles southwest of Reading and roughly 60 miles northwest of Philadelphia, Adamstown typically sees April temperatures that average between 61°F and 38°F, while rainfall totals average just over 3.7 inches for the month.

See the race route map for the Rumspringa Half Marathon here.

To reserve your spot in the 2016 running of Adamstown’s Rumspringa Half Marathon, register online at UltraSignup.com here.

Ever run in the Rumspringa Half? Share your impressions here, or post your review in the Comments below.