Set for its 7th annual running this summer along the winding Susquehanna River here in the central Pennsylvania city that’s known as the birthplace of Little League Baseball, the Running Over Addiction races also serve as a fundraiser for the West Branch Drug & Alcohol Abuse Commission, which works both on prevention as well as treatment for those fighting addiction in the local area.

The race begins in Williamsport’s South Williamsport Park Complex, where runners will follow an out-and-back course that starts and finishes at the park.

From the starting line on East Central Avenue, runners will head north toward the River Walk, which follows along the north and south levees of the river’s West Branch. You’ll follow the first half all the way to Maynard Street, where you’ll cross over the bridge and then head onto the north levee portion of the trail.

The next five miles of the race will bring you east along the river all the way to Riverfront Park, where you’ll reach the race turnaround inside the park. Next, you’ll head back onto the trail, following it in reverse along the route you’ve just run.

The flat, fast trail will bring you to Market Street, where you’ll turn left and head across the bridge back over onto the southern levee, and from there you’ll follow the trail all the way back to South Williamsport Park, where you’ll cross the finish line inside the park. 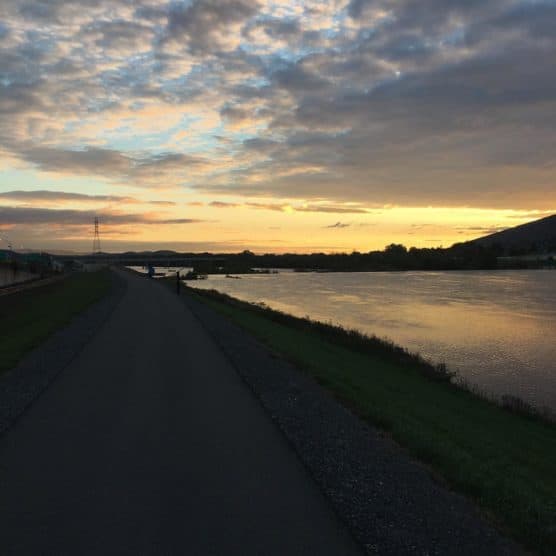 The Susquehanna River as seen from the Riverwalk in Williamsport, Pa. (Courtesy Running Over Addiction Half Marathon)

Nestled along the West Branch of the Susquehanna River in central Pennsylvania, just over 130 miles northwest of Philadelphia, Williamsport see mostly mild to cool temperatures in September, which also is its third-wettest month of the year.

See the race route map for the Running Over Addiction Half Marathon here.

To reserve your spot in the 2022 running of Williamsport’s Running Over Addiction Half Marathon, 10K or 5K race, register online at RunSignUp.com here.

Ever run in the Running Over Addiction Half Marathon? Share your impressions here, as well as anything you learned about the race that you think other runners/walkers should know.