Set for its 6th annual running along the roadways that wind along the twists and turns of the Susquehanna River here in northern Pennsylvania, the Sheshequin Path Half Marathon unfolds through a region filled with Native American historic trails and places.


In fact, the race takes its name from the Sheshequin Path, a historic Native American trail that once stretched for miles between a pair of villages along the Susquehanna and was used by both the native inhabitants of the region as well as early settlers hundreds of years ago.

The trail’s name comes from the Lenape native language and means “at the place of the gourd rattle,” but Native Americans wouldn’t be the only ones to use it. Early American settlers like Conrad Weisner, who served as a kind of ambassador between the Iroquois and the Dutch settlers of the Pennsylvania colony, traveled it often on his emissary missions.

It was also used by both the Americans and the British during the Revolutionary War, and the path would even become part of the Underground Railroad in the years leading up to the Civil War — slaves on their way north from southern plantations would use its creek waters to hide, historians say, to escape the bloodhounds hunting for them.

That’s all to set the stage, so you see that you’ll be literally following in the footsteps of history when you run this race, which starts at Riverfront Park in Sayre, a borough of just over 5,000 residents in Bradford County.

From there, you’ll head south along Thomas Street and then onto Riverside Drive, which will carry you southward alongside the river for the next several miles. There are some hilly stretches on the course — especially between miles 4 and 5, and then again between miles 10 and 12.

But most of the rest of the route is fast and flat — you’ll experience about 1,200 feet of elevation change over the course of the race, and organizers say to expect gorgeous fall scenery with the leaves turning all shades of red, orange and gold.

Race packet pickup will take place on Friday at Hornbrook County Park, and runners will also be able to pick up their packets on the day of the race in Riverfront Park. 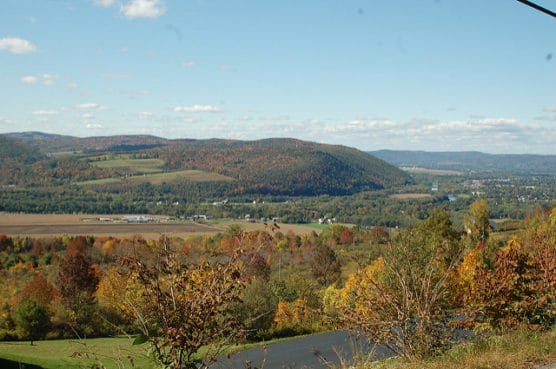 Scenery in Athens, Penn., one of the small towns you’ll run through along the course at the Sheshequin Path Half Marathon between Sayre and the finish line in Larnard-Hornbrook County Park. (Photo by Michelle Bradley/flickr)

Nestled along the banks of the Susquehanna River near the Pennsylvania-New York border, about 216 miles northwest of New York City, Sayre typically sees some of its mildest weather of the year in October, with temperatures that average between the upper 30s and the lower 60s, and rainfall totals just over 3 inches for the month.

See the race route map for the Sheshequin Path Half Marathon here.

$25 and up for the half marathon

To reserve your spot in the 2022 running of Sayre’s Sheshequin Path Half Marathon race, register online at RunSignUp.com here.

Ever run in the Sheshequin Path Half Marathon? Share your impressions here, as well as anything you learned about the race that you think other runners/walkers should know.