Nestled along the Blackstone River falls and the upper tidewaters of the Narragansett Bay, this Rhode Island city that’s home to baseball’s AAA-level Pawtucket Red Sox plays host in April to the Navigant Blackstone Valley Half Marathon and 5K, both of which start at Pawtucket’s City Hall on Roosevelt Avenue.


As its name suggests, the race takes runners along a 13.1-mile route that unfolds for a large portion along the Blackstone River, which flows through the heart of the city’s downtown and later meets up with the upper tide waters of Narragansett Bay, near Providence just a few miles to the south.

Runners start the out-and-back course for the half marathon in downtown Pawtucket at the corner of Main Street and Roosevelt Avenue, just blocks from Slater Park and the Pawtucket City Hall building.

From there, runners then head northward along what is roughly a north-south out-and-back route, following the roads and city streets that lie closest to the river as they make their way northward toward Valley Falls and Valley Marsh.

Next, runners keep heading northward and westward along River Road and Lower River Road until they make their way nearly all the way to Interstate 295, where the Blackstone River reservoir lies.

There, runners make the turnaround and then head back southward in the direction they came, this time along the path that parallels the river, following its winding route through the Quinville Conservation Area southward, along the tree-covered path with the river flowing by alongside the route.

The route keeps heading south back into Valley Marsh, where runners then meet up with the section of the race they ran in the first three miles — this time, they run back in the opposite direction along the same streets, on their way to the finish line just south of Slater Park. 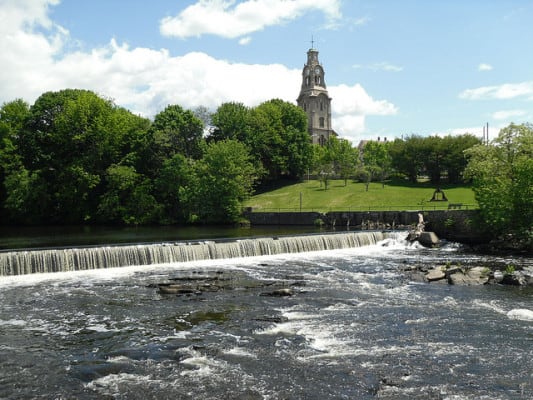 See the race route map for the Blackstone Valley Half Marathon here.

To reserve your spot in the 2017 running of Pawtucket’s Blackstone Valley Half Marathon or 5K race, register online at RaceWire.com here.

Ever run in the Blackstone Valley Half Marathon? Share your impressions here, or post your review in the Comments below.