The gorgeously scenic shoreline of Rhode Island’s Narragansett Bay makes up all but a few miles of the course at the Gansett Half Marathon, which makes its 5th annual running this year and takes runners from the town’s most famous landmark down to the historic Point Judith Lighthouse and back.


Runners start the race in Narragansett — nicknamed “Gansett” by locals — at the intersection of Ocean Road and Beach Street, within view of the Towers, the town’s best-known landmark and the only remaining part of the Narragansett Pier Casino, which was built here on the ocean in the 1880s. They’ll run through the Towers twice — on the way out right after the start, and on the return route back just before the finish.

From there, the course heads south along Ocean Road for nearly a mile, and then west with a right turn onto Earles Court, which is followed by turns on Gibson Avenue and Kinney Avenue. After the ocean views of the first mile, the course turns into more wooded areas in mile 2, and there is also a hill right after the mile 1 marker as runners make their way over the next couple of miles to Point Judith Road.

Just as quickly as they climbed the hill around mile 1, about two miles down the road there’s an equally fast downhill stretch on Point Judith and Clarke Roads. Here, runners are heading toward Black Point and Scarboro Beach, and organizers say this stretch is “well paved, with little traffic, and very idyllic.”

About halfway between miles 4 and 5, runners turn right to head back onto Ocean Road, and this begins the long stretch southward to Point Judith and the Point Judith Lighthouse, which has stood guard since 1856 over this rocky shoreline whose cold waters have been a dangerous place for ships for centuries.

Once runners make it to the lighthouse and turn around, the rest of the course is all along the oceanfront, with amazing views of the waves crashing along the shoreline for much of the next six miles. There’s a quiet summer neighborhood right after the turn on Pilgrim Avenue, followed by tree-lined stretches as runners make their way north, and even a stretch past a golf course around mile 11.

Runners finish back where they started after passing under the Towers a second time, and they’ll have three hours, 15 minutes to finish the race. If they can’t, they can still finish, but they may not receive an official time or a finisher’s medal, organizers say. 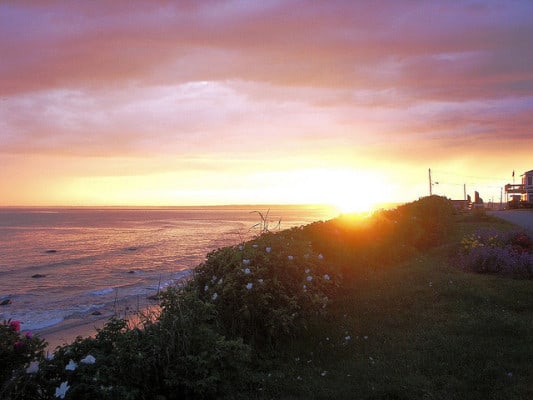 The view from Shore Road near the Point Judith Lighthouse. (Photo by robposse/flickr)

Located along a narrow strip of land between the Pettaquamscutt River and Narragansett Bay, the small town of Narragansett typically sees October temperatures between 41ºF and 65ºF, while precipitation amounts (and snow is possible this time of year) average just over 4 inches.

To reserve your spot in the 2018 running of Narragansett’s Gansett Half Marathon race, register online at the event website here.

Ever run in the Gansett Half Marathon? Share your impressions here, or post your review in the Comments box below.