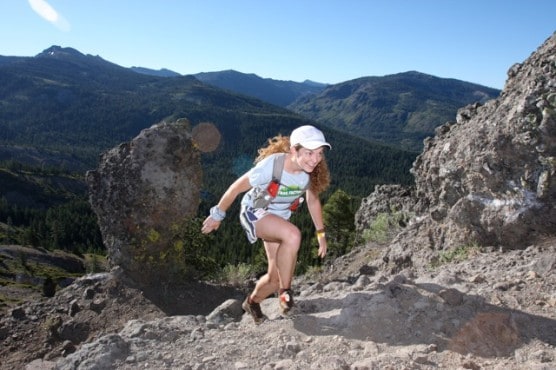 I still haven’t tried all the distances yet, so I don’t feel like I can make a decisive proclamation. I guess it’s fair to say, though, that I usually look for the best price per mile. This tends to preclude 5Ks.

In 2004, I had to miss Bloomsday because I was living abroad. But in 2005, I returned and ran Spokane’s Lilac Bloomsday 12K in 58:15. This was my twelfth Bloomsday and it remains my proudest racing moment.

I don’t feel guilty about any of my dietary choices, but I definitely consider eating a pleasure! Foods I like that aren’t traditionally considered healthful include Little Caesar’s cheese-errific pizzas and those delicious mini-cinnies they sell at Costco sometimes.

4) The gear you cannot run without?

I tie back my hair with a very specific wide, flat, seamless (metal free!) elastic made by Smoothies. Unlike bands by other brands (Goody, scünci I’m looking at you!) this elastic does not foster bumper crops of impossible knots and starter dreadlocks in my kinda unruly mane.

5) Do you have all your toenails?

I like to work out my ill will toward errant youths at an 8:30 pace, beside a sympathetic body of water, and in the late afternoon.

The Wall Ultramarathon in England. Because who doesn’t want to start a race at a castle and be merry alongside the River Tyne?

Last summer I did the Firecracker Quadzilla (four marathons in four days) in Portland, Oregon. Around mile 20 on the last day a bug flew into my ear. It crawled up my ear canal and started buzzing and humming and comporting itself in a generally alarming fashion.

The sound was loud, the sensation was painful, and I cried. I ended up lying (wailing) in the grass on my side while a stranger poured water in my ear to try and drown the infernal thing. Other marathoners, who I’d been running with for several days, shuffled by and gave their breathless “condolences” while I clutched my split shorts and wished I had remembered to shave.

I wear a Tweety Bird slap bracelet on all my long races. A couple of sweet little West Virginian dudes won it for me out of a vending machine, and I finish less strong without it.

Any place is a good place if I’m running.

11) One way running has made you a better person?

I can’t really remember a time when I wasn’t running, so it’s hard for me to see a correlation between self-improvement and the pastime that I love. I guess I do notice that running makes a fairly good metaphor for pretty much anything. It’s a concrete way to understand more abstract and confusing stuff like struggles and failures and pain and effort. Experiencing all those things myself through running—and observing other runners experiencing them differently—helps me be (I think) more gracious and empathetic when I encounter people dealing with them outside of our sport.

I am in love with the American River 50 Patagonia finisher’s jacket. I’m so in love with it, in fact, that I wear it to work multiple times per week and people are starting to wonder whether I ever wash it.

Pulling Cheetos out of a pencil sharpener.

Tagged as: Why I Run

Next post: 7 Things To Know About Buying Your First Running Shoes

Previous post: 5 Things You Can Do to Make Your Weekly Long Run Easier