One of a series of races at amusement parks across the Southeast, the Run & Ride series comes to South Carolina’s Carowinds Amusement Park in October with the annual running of the Carowinds Half Marathon & Quarter Marathon, run on a course that unfolds almost entirely within the confines of the park.


Runners will wind their way past roller coasters, water rides, children’s attractions and more, nearly all along the roads and walkways within Carowinds, a nearly 400-acre park that bills itself as the “Thrill Capital of the Southeast” for rides like its Carolina Cobra and Carolina Cyclone roller coasters.

The park straddles the state line between South and North Carolina, and lies about a 20-minute drive south from Charlotte and roughly an hour and 10 minutes from Columbia.

The half marathon — which is run on Sunday morning, while the 5K and 1-mile races are run on Saturday — begins near the entrance to the park on Avenue of the Carolinas. From there, runners first make their way south along the edges of the parking lot and then enter the park near the Top Gun roller coaster ride.

After that, the course unfolds past a series of rides, games and funhouse-style attractions like Planet Snoopy, Kookaburra Bay and Camp Wilderness, a resort within the park.

Though there’s plenty of rolling terrain, there are few hills to speak of anywhere along the course, as nearly all of it lies within the park or along the parking lot road just outside. All during the race weekend, half marathon entrants will get free entry to the park, so you can ride all of the rides to your heart’s content before and after your run. 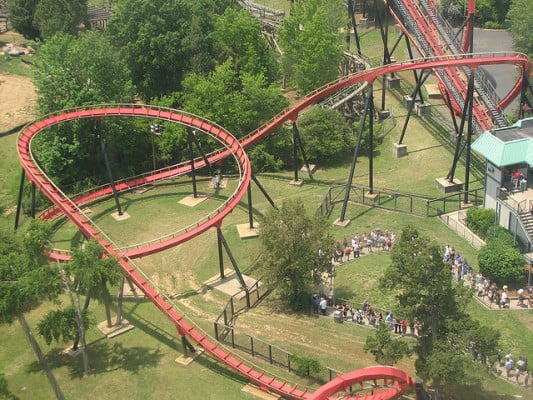 The Vortex roller coaster at Carowinds. (Photo by Jeremy Thompson/flickr)

Located in the northern part of the state, along the North Carolina-South Carolina state line and roughly 20 miles south of Charlotte, N.C., Fort Mill typically sees September temperatures between 63ºF and 82ºF, while rainfall amounts average 4.6 inches, making it one of the area’s wettest months of the year.

See event website. Registration comes with a choice of a day pass or weekend pass to Carowinds.

To reserve your spot in the 2017 running of Fort Mill’s Carowinds Half Marathon, Quarter Marathon, 5K or 1-Mile, register online at RunSignUp.com here.

Ever run in the Carowinds Half Marathon? Share your impressions here, or post your review in the Comments box below.