One of a series of half marathon races designed especially for women, the Divas Half Marathon in North Myrtle Beach hosts both a 13.1-mile race as well as a 5K race called the Girls 5K, all part of a weekend planned to both encourage and celebrate athleticism and fitness in women and girls of all ages (with flair, of course).


Pink is a color you’ll definitely see at any Divas race, as women (both participants and volunteers) don pink feather boas, pink running shorts and shirts and pink headbands and accessories of really all kinds at these races, which now include events from April through November in Long Island, New York; San Francisco, Calif.; Honolulu, Hawaii and San Juan, Puerto Rico.

This year’s race will mark the 7th annual Divas half marathon series to run in the North Myrtle Beach area, and last year’s race saw more than 4,900 runners cross the finish line in both races combined. The race will feature an out-and-back course that starts near the Myrtle Beach oceanfront, on Ocean Boulevard near the intersection with Main Street.

From there, the course heads along the ocean for the first couple of miles, and then brings runners back northeast through the beach house neighborhoods along Myrtle Beach, and past several of its resort hotels and golf courses, including McLean Park and the Robbers Roost Golf Club, whose wide green fairways runners will be able to see from the race as they pass by.

The race finish line lies just a few blocks from the start, along Main Street from Ocean Boulevard.

In addition to the planned nine water and refreshment stations along the course, organizers also plan to offer a feather boa station and tiara station out on the course during the race — so if you didn’t bring one of your own and the spirit moves you, you can join in and “glam up” with the gear many other runners will be wearing during the race.

Runners will have a course time limit of 3 1/2 hours to complete the half marathon. Perhaps the best part of the race is the race finish, where every runner who crosses the finish line will receive not just a finisher’s medal, but a rose and a flute of champagne to celebrate finishing their 13.1 miles. 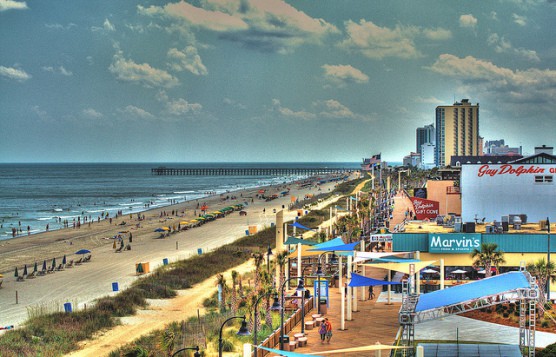 Located in the easternmost corner of South Carolina along its Atlantic shoreline, roughly 15 miles northeast of Myrtle Beach, North Myrtle Beach typically sees moderate to warm temperatures in April, where temperatures typically range from the low 50s to the high 70s.

See the race route map for the Divas Half Marathon in North Myrtle Beach here.

To reserve your spot in the spring 2020 running of North Myrtle Beach’s Divas Half Marathon or Girls 5K race, register online at Active.com here.

Ever run in the Divas Half in North Myrtle Beach? Share your impressions here, or post your review in the Comments below.