Fast, nearly all flat paved roads along tree-lined roads that wind through golf course communities and along the beaches of this resort island on the coast of South Carolina await runners at the annual Kiawah Island Marathon & Half Marathon, which makes its 44th annual running this year.

More than 3,000 runners cross the finish line in both races combined in most years — including more than 2,000 finishers in the half marathon alone — along a course that takes participants through a combination of oceanside forests, marshlands and leisurely resort roadways, with plenty of scenic views of the island’s majestic beachfront homes, waterways and more.

Runners start both the full and the half marathons at Kiawah’s West Beach Village, and from there head east through the island’s interior roadways in the early miles, along Kiawah Island Parkway, Governor’s Drive and past the Turtle Point Golf Club.

The second half of the course then brings runners out of the interior parts of the island and toward the shoreline, where they’ll run along Flyway Drive and Surfsong Road, passing by the beaches at Osprey Beach and Vanderhorst Plantation along the way.

After the turn onto Ocean Green Drive and the mile 10 marker, the course then weaves its way back to the village where the finish line lies.

Perhaps most famous as one of the Eastern seaboard’s most well-known golf destinations, Kiawah Island has twice been home to professional golf’s Ryder Cup and hosted the PGA Championship in 2012. The resort features 10 miles of beaches and is just a short drive from nearby Charleston, another major South Carolina tourist destination.

For runners who’d like to get a preview of the course before the race, organizers point out that a majority of the race course lies within a secure private community on Kiawah, and is thus closed to vehicles for preview before the event. 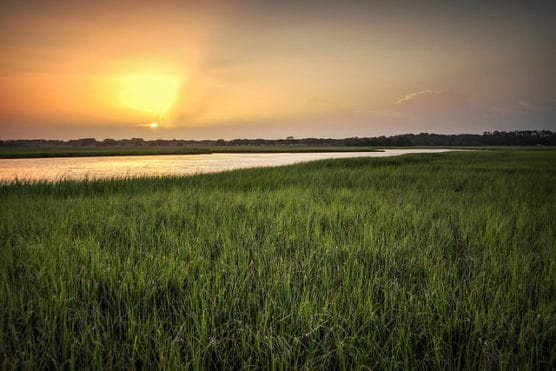 The sun sets over the marsh at Mingo Point on Kiawah, Island, in this photo from summer 2017. (Photo by See1,Do1,Teach1/flickr)

Blessed with typically mild winters (with temperatures that rarely dip into the upper 30s), the Kiawah Island area enjoys ample rainfall year-round, though December is one of its drier months with just under 3 1/4 inches of average precipitation.

Average monthly temperatures on Kiawah range between 39°F and 62°F in December, while on the day of the race (Dec. 10), the average low is 41°F and the average high is 63°F.

To reserve your spot in the 2022 running of the Kiawah Island Marathon or Half Marathon, register online at RunSignUp.com here.

Ever run in the Kiawah Island Half Marathon? Share your impressions here, or post your review in the Comments box below.