Recognized by USA Today as one of the nation’s “10 great winter marathons,” the Myrtle Beach Marathon, Half Marathon & 5K features a weekend full of running, walking and biking events, and saw more than 5,500 runners cross the finish line in all three running events at the race’s 2016 running, including more than 2,900 finishers in the half marathon alone.

The half marathon portion of the race takes runners on an out-and-back route that starts and finishes in the shadow of downtown Myrtle Beach’s BB&T Coastal Field, the home of the Myrtle Beach Pelicans, the class A affiliate of Major League Baseball’s Atlanta Braves.

Runners have a fast and flat course for the half (as well as for the full and the 5K race). From the starting line at the intersection of Grissom Parkway and 21st Avenue North, the course takes runners along paved streets through this coastal city, starting off with stretches along Grissom Parkway and Joe White Avenue, followed by a roughly three-and-half-mile-long stretch along South Kings Highway.

Next, the course heads west toward the Market Common, the shopping and entertainment district that lies just west of the Myrtle Beach Jetport.

Runners follow Hackler Street, Howard Avenue and Nevers Street through the Market Common, and then turn onto the Farrow Parkway along its western edge, for a stretch that will bring them south down to Ocean Boulevard, which begins perhaps the most scenic portion of the race, the miles-long stretch along the Myrtle Beach oceanfront.

Along this stretch of the course, runners and walkers are taken through some of Myrtle Beach’s most notable tourist attractions, including the Family Kingdom Amusement Park, as the miles of hotels tower over the beachfront and look out onto the waters of the Atlantic.

The course for the half marathon closes at 11:00 AM, so runners will have 4 hours to complete the race. Following the race, the event organizers host a post-race party for all participants at the House of Blues. 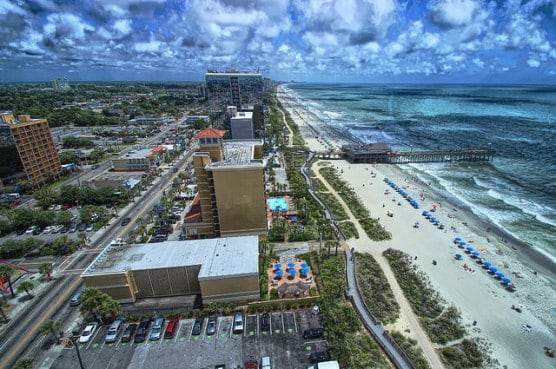 Located along the northeast corner of the South Carolina coastline, roughly 150 miles east of Columbia and about 100 miles northeast of Charleston, Myrtle Beach typically sees March temperatures that average between 44°F and 68°F, while precipitation amounts average just over 4 inches for the month.

See the race route map for the Myrtle Beach Half Marathon here.

To reserve your spot in the late winter 2023 running of the Myrtle Beach Marathon, Dasani Half Marathon or RBC Bank 5K race, register online at the event website here.

Ever run in the Myrtle Beach Half Marathon? Share your impressions here, or post your review in the Comments box below.