The crown jewel of the 60-mile stretch of coastline known as South Carolina’s “Grand Strand,” Myrtle Beach plays host to the 14th annual running of the Myrtle Beach Mini Marathon, Coastal 5K and 1.5-mile Doggie Dash, for a fast and largely flat race that starts at the city’s Pavilion Park and finishes at Plyler Park, located right on the beach off North Ocean Boulevard.

In addition to the half marathon on Sunday morning, the race hosts three additional events on Saturday — the Coastal 5K race with a fast and flat course that runners can use as a warm-up for the Mini Marathon the next day, and a 1.5-mile Doggie Dash for runners and walkers who want to come out to the race with their pets.

On Sunday it’s time for the race’s 13.1-mile event, which follows a loop route that starts at Pavilion Park. From the starting line on the western side of the park, just off 8th Avenue, runners briefly detour south before turning north onto Joe White Avenue.

After a brief coast north, runners then follow the race route on a mostly counterclockwise loop around Myrtle Beach, turning right onto Grissom Parkway, which they follow as it winds its way eastward for the next three miles, accompanies by a couple of detours and turnaround points.

The course makes its way around Celebrity Circle through mile markers 8 and 9, taking runners past the Ripley’s Aquarium and then out onto 29th Avenue, where they then head southeast toward the beach.

Once runners hit North Ocean Boulevard, which looks out onto the waves washing in along the shoreline, the remaining three miles of the race are basically two long straightaway stretches.

From the turn onto North Ocean, runners follow the road all the way down to 2nd Avenue, where they turn around and head back up the boardwalk along the beach to the finish line at Plyler Park.

Participants will have a 3 1/2 hours to complete the half marathon, which means the race is open to walkers as well as runners. 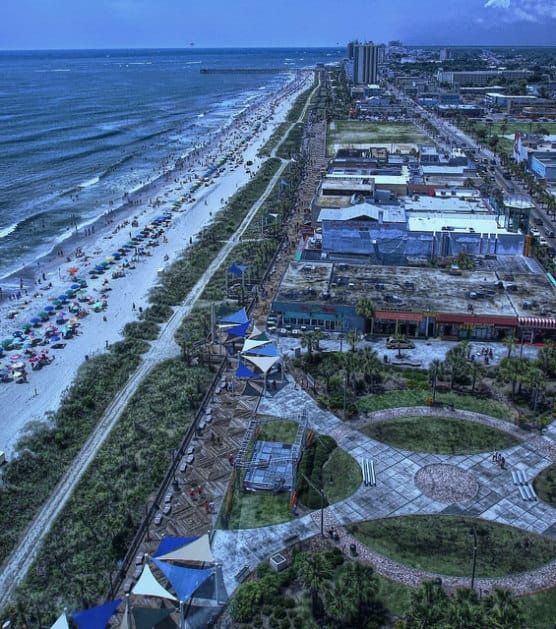 One of the Southeast’s premier golf resorts, the city of Myrtle Beach is known for its hot summers that make its beaches also one of the region’s top summer tourist attractions, but in the fall the area typically sees milder and drier weather.

To reserve your spot in the fall 2023 running of the Myrtle Beach Mini Marathon, Coastal 5K or Doggie Dash, register online at RunSignUp here.

Ever run in the Myrtle Beach Mini Marathon? Share your impressions here, or post your review in the Comments below.