Set for its 18th annual running on the weekend before Halloween, Greenville’s Spinx Run Fest has become one of the state’s most popular running events, with more than 2,000 finishers in all three races combined each year, including some 760 in the half marathon alone.

The half marathon — officially titled the Run Town USA Half Marathon — follows an out-and-back course that starts and finishes at Greenville’s Fluor Field, the home of the Greenville Drive minor league baseball team, a Class A affiliate of the Boston Red Sox.

From the starting line at the corner of Markey and Main Streets near the ball park, the race route what could basically be described as a clockwise loop course through the city, along a combination of city and neighborhood streets as well as stretches along the Swamp Rabbit Trail, a 13 1/2-mile-long trail for bikers, walkers and runners that runs alongside the Reedy River, connecting Greenville with the nearby town of Travelers Rest.

Runners follow the course as it winds through local parks like Meadowbrook Park, Reedy River Falls Park and Cleveland Park, and much of the early and middle miles of the race unfold along the river. The second half of the race includes more hills than the first, with some short, steep hills especially as runners head into miles 8 through 10, along Cleveland Street, McDaniel Avenue, Lanneau Drive and McPherson Lane.

After the hills, the route then flattens out again as runners hit the home stretch back in toward the finish line, making a few turns in the blocks just west of the baseball stadium. The last stretch of the race includes perhaps the highlight of the course, as runners make their way all around Fluor Field and then into the ballpark to cross the finish line on the field.

Runners will have 4 hours to complete the 13.1 miles of the half marathon, organizers note, and both the full and the half marathons are for runners only — walkers are welcome to enter the 5K. 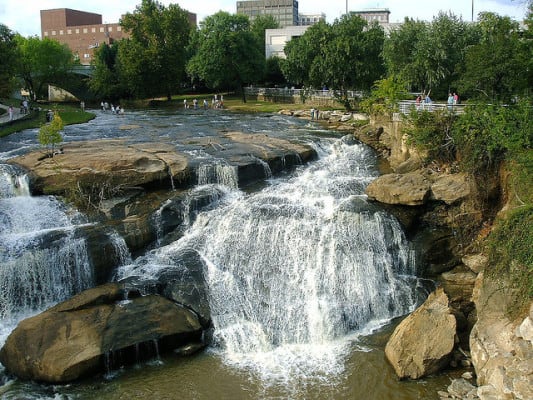 Located in the Piedmont region of northeastern South Carolina, just over 100 miles northwest of Columbia, Greenville typically sees October temperatures that average between 50°F and 71°F, and relatively even precipitation throughout most of the year — rainfall totals average just under 3.9 inches for the month.

See the race route map for the Spinx Run Fest Half Marathon here.

To reserve your spot in the fall 2022 running of Greenville’s Spinx Run Fest Marathon, Half Marathon, 10K or 5K race, register online at RunSignup.com here.

Ever run in the Spinx Run Fest Half Marathon? Share your impressions here, or post your review in the Comments box below.