The rugged, hilly terrain of South Dakota’s Black Hills region unfolds along the course of the Deadwood Mickelson Trail Marathon, Half Marathon & Relay, following the former Burlington Northern Rail Line, which stretched 114 miles from Edgemont to Deadwood, S.D., until it was abandoned in 1989 and converted to a bicycle, hiking and walking trail.

The half marathon course, which begins at the halfway point of the full marathon just outside the town of Dumont, takes runners northward along the Mickelson Trail on an almost all-downhill course to the finish line in Deadwood.

More than 2,200 runners crossed the finish line in the full, half and relay marathons in 2016, including just over 1,920 finishers in the half marathon alone.

The race takes runners over a mixture of paved surfaces and gravelly trails, and runs through some of South Dakota’s most well-known areas — home of Mount Rushmore, the Crazy Horse Memorial, and the Devils Tower National Monument (perhaps made most famous in the movie “Close Encounters”).

Most of the course is either flat or gently sloping downhill stretches. In the final six miles of the half-marathon, the course is almost all downhill, especially between miles 8 and 10, which race organizers describe as a “serious downhill — you’ll have to be careful not to become a runaway.”

The remaining 4 miles are mostly flat and end at the Engine Trailhead in downtown Deadwood. 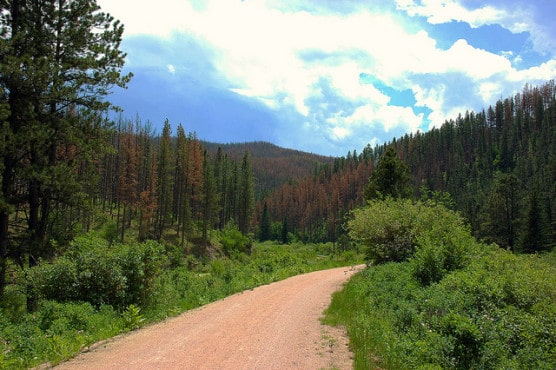 A stretch of the Mickelson Trail in the Black Hills of South Dakota. (Photo by wilmsie_2002/flickr)

Located in the Black Hills region of western South Dakota, roughly 40 miles northwest of Rapid City, Deadwood typically sees cool to moderately warm weather in June, a month that has brought record temperatures here as low as 23 degrees (in 1979) and as high as 102 degrees (in 2002).

See the race route map for the Deadwood Mickelson Trail Half Marathon here.

To reserve your spot in the 2023 running of the full marathon, half marathon or team relay race at the Deadwood Mickelson Trail Marathon, register online at GetMeRegistered.com here.

Ever run in the Deadwood Mickelson Trail Half Marathon? Share your impressions here, or post your review in the Comments below.