The name of Tennessee’s Oak Barrel Half Marathon, which is set for its 11th annual running here in this town of just over 5,000 residents, becomes apparent if you’ve ever looked closely at the label on a bottle of whiskey, as Lynchburg is the home and world headquarters of the Jack Daniels Distillery, where every bottle of its world famous whiskey is made.

Runners who make their way to this beautifully scenic small town in the hills of southern Tennessee, located along the state’s Cumberland plateau, will get a chance to enjoy both its small-town charm and the irony that the county in which Jack Daniels whiskey is made and sold, Tennessee’s Moore County, is a dry county — which means also that while the whiskey can be made here, it can’t be sold by the bottle or the glass in its own hometown.

What that has yielded is some intriguing creativity on the part of local shop owners, cafes and restaurants, where you can see items on the menus like “whiskey coffee” and even “whiskey cheeseburgers” (I’ve actually enjoyed one of these on a years-ago visit to Lynchburg, and believe me, you don’t want to get behind the wheel after you’ve had one!).

The distillery itself is well worth a visit, as authentic Tennessee mountain men — complete with overalls and all — lead visitors on a tour of the distillery’s whiskey operations, where you can take in the sights, sounds and smells of real Tennessee whiskey.

Now all of that, of course, has little to do with the actual race, which organizers plan as an out-and-back race that takes runners both through the town of Lynchburg and along the tree-lined rural country roads that surround the town, with a route featuring plenty of green farm fields and the pastoral beauty of the rolling countryside of this part of Tennessee.

The course starts at the Lynchburg Courthouse Square, and runners will finish the race just a short stretch up Highway 55, at the Jack Daniels Distillery, where the race organizers plan to host both the post-race festivities and the event’s award ceremonies, where they will present awards both to the top three overall male and female winners as well as awards in several age group categories.

Just over 1,100 runners crossed the finish line in the half marathon in 2014. Runners also will have a course time limit of 4 hours. 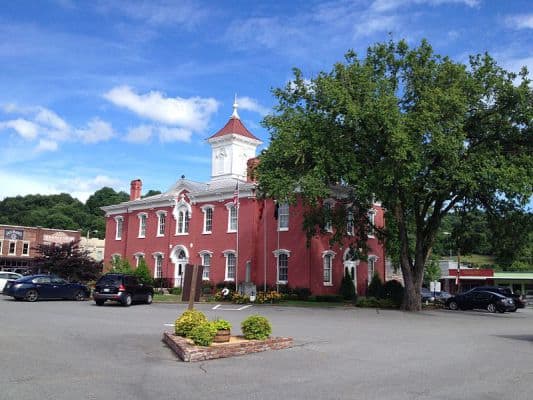 The Moore County Courthouse, where the Oak Barrel Half Marathon starts. (Photo by Wikimedia)

Nestled among the hills of central southern Tennessee, roughly 95 miles west-northwest of Chattanooga by car, the city of Lynchburg can see quite cold winters but usually milder to moderately warm weather in the spring, and plentiful precipitation year-round.

See the race route map for the Oak Barrel Half Marathon here.

To reserve your spot in the 2023 running of Lynchburg’s Oak Barrel Half Marathon, visit the event website.

Ever run in the Oak Barrel Half Marathon? Share your impressions here, or post your review in the Comments box below.