Note: The 2016 event is cancelled due to the Chattanooga Marathon taking place on March 6.

The last weeks of winter in late February 2015 will bring the 8th annual running of the Scenic City Half Marathon & 5K in Chattanooga, a mountain city of roughly 200,000 people set in Tennessee’s Appalachian foothills, and home to the famed Lookout Mountain, Ruby Falls and Rock City (“See Rock City”) tourist attractions.


Starting from downtown’s Finley Stadium, the home field of the University of Tennesee at Chattanooga’s football team, the race takes runners through Chattanooga’s scenic downtown districts and neighborhoods, along a fast and mostly flat course made up entirely of paved city streets.

Throughout the three hours allotted for the race, runners will get to see many of the “Scenic City’s” most noteworthy sights, including the Tennessee Aquarium, the Incline Railway, the Market Street Bridge, Bessie Smith Hall and Chattanooga’s National Cemetery, a Civil War cemetery where more than 12,000 Union soldiers were buried following the Battle of Chattanooga in 1863.

The most significant inclines or hills of the race occur in the first few miles as the course takes runners across the river and back via the Market Street and Veterans Bridges, including a run past Coolidge Park.

The 13.1-mile race also includes a four-mile stretch along the Tennessee Riverwalk and a brief turn through the city’s North Shore district, before heading back through town toward the finish line at Finley Stadium. 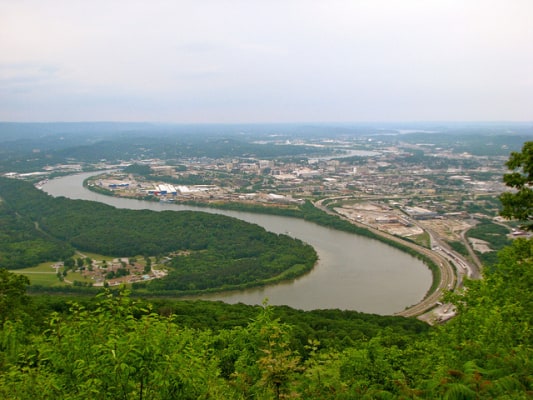 View of downtown Chattanooga and the Tennessee River from nearby Lookout Mountain. (Photo by Jeff Gunn/flickr)

Late February can still be very cool to cold in the Chattanooga area, nestled in the central southern part of the state just over the border with Georgia. Average February temperatures range between 55°F and 34°F, while rainfall is always a possibility, as the city averages just over 5 inches of precipitation for the month.

See the race route map for the Scenic City Half Marathon here.

To reserve your spot in the late winter 2015 running of Chattanooga’s Scenic City Half Marathon, register online at Active.com here.