Filled with some 2,800 acres of forests, biking trails and walking paths, Chattanooga’s Enterprise South Nature Park is the setting for the late-summer running of the Still Hollow Half Marathon, which saw just over 300 runners cross the finish line in both races combined last year.


Runners start the race at the parking lot just off Connector 3 Road inside the park, along the Poe Branch Creek. From there, the half marathon and the 10K start together, with runners in both races following the same route for the first six miles.

Those miles take you over a range of terrain, which in recent years has included surfaces from dirt to mulch, with plenty of rocks and tree roots to contend with as you run. There are also plenty of hills in the first half (of the half marathon), so expect lots of up-and-down terrain.

You can expect the trails to be wider and the terrain to be softer in the first half of the race, organizers say – it’s in the second half where the course shifts to single-track trails.

Once you finish the first 10 kilometers – the first six miles and change – that’s when the second half of the half marathon begins, and it takes you deeper into the park’s more remote wooded areas. Here’s where you’ll find some of the bigger hills in the race, especially between miles 9 and 10, where the steepest hill on the course occurs.

Where you’ll be running the race – Enterprise South Nature Park – doesn’t lie far from downtown Chattanooga. It should only take you about 15 minutes to drive there, as it’s located next door to the Volkswagen of Chattanooga car manufacturing plant.

It also has an interesting history. For more than 30 years, the area served as the Volunteer Army Ammunition Plant, where TNT — the explosive material used in making bombs — was made, beginning in the middle of World War II.

More than 800 million pounds of it were made here for the war; after brief pauses in between conflicts, it was re-started for the Korean and Vietnam Wars, and finally closed in the late 1970s.

So don’t be surprised if you see more than a few sealed ammunition bunkers when you’re out running through the woods on the half marathon course – you’ll be running through a small piece of America’s military history here. 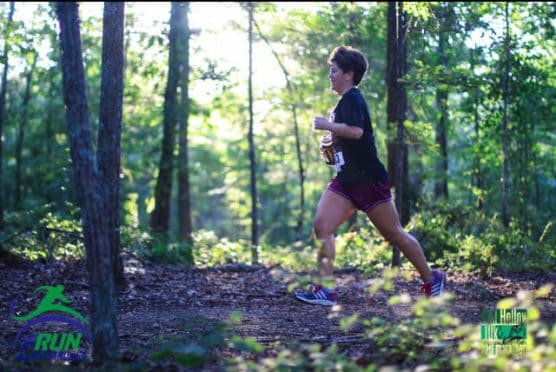 A runner treks the trails through Enterprise South Nature Park at the Still Hollow Half Marathon in Chattanooga, Tenn., in 2015. (Photo by Shannon McGee/flickr)

Nestled along the Tennessee River in the middle of the state, about a 2 ½-hour drive from Atlanta, Chattanooga typically sees some of its warmest weather of the year in August, when temperatures average between the mid-50s and the mid-80s, with moderate precipitation all year long.

See the race route map for the Still Hollow Half Marathon here.

To reserve your spot in the late summer/early fall running of Chattanooga’s Still Hollow Half Marathon or 10K race, register online at the official race website below.

Ever run in the Still Hollow Half Marathon? Share your impressions here, as well as anything you learned about the race that you think other runners/walkers should know.