Building on the success of the original Women’s Running Series Half Marathon, which saw its first running in St. Petersburg, Fla. in the fall of 2009, the race organizers added a pair of new race events in 2010, including a half in Arizona as well as the women’s half that’s now set for its 5th annual running in Nashville in September 2014.


The race follows an out-and-back loop course that starts and finishes at the city’s famed Country Music Hall of Fame & Museum, which lies near the banks of the Cumberland River that flows through the city just a short walk from the nearby Ryman Auditorium, which served as the home of the Grand Ole Opry for decades, and the country music honky tonk bars of Lower Broadway just down the street.

From the starting line at the museum on Demonbreun Street, runners head northeast a few blocks before turning on First Street and then again on Church Street, which they follow for roughly the next three miles or so until they reach the outskirts of the campus of Vanderbilt University and Centennial Park — the home of the Nashville Parthenon, a complete replica of the one in Athens, Greece — which lies across the street from campus. Runners then head into the park on 25th Avenue, turning onto 27th Avenue for a loop up and around the park’s interior.

The course rises steadily in elevation over the race’s first few miles, though it’s mostly a long, gradual uphill ascent between mile markers 2 and 5, as runners head into and out of the park and onto 31st Avenue. Runners then follow this street as it loops around the western edge of Vanderbilt’s campus and onto Natchez Trace, and then turn again on Fairfax Avenue, and then again on Convent Place and Portland Avenue.

The route follows Portland as it turns right and becomes Belmont Boulevard, which runners then follow southward all the way to the turnaround point near the highway for Interstate 440, at Stokes Lane. The course then heads back up northward along Belmont toward the campus of Belmont University, where runners also pass over the race’s highest elevation point around the mile 8 marker.

After this point, runners then head northward back into Nashville’s downtown along a mostly downhill descent back into the city, and then head around James Robertson Parkway toward Gay Street, which will take them on a stretch along the waterfront of the Cumberland River. The course next heads back onto 2nd Avenue and then heads back to the Country Music Hall of Fame for the race finish. 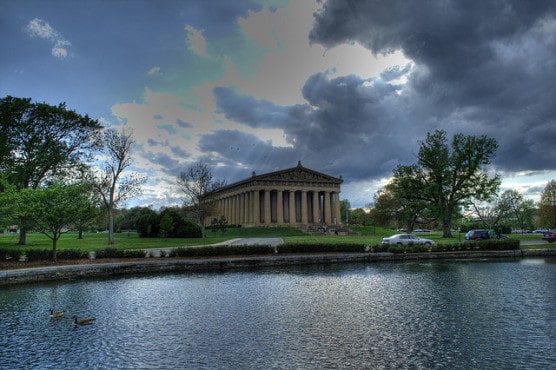 The Parthenon in Nashville’s Centennial Park. (Photo by Corey Butler/flickr)

Nestled among the hills of the northern central part of the state, roughly 135 miles north from Chattanooga along Interstate 24 and about 180 miles west of Knoxville, Nashville can still see quite warm weather conditions in the early fall.

On the day of the race (Sept. 27), the average low is 57°F and the average high is 78°F, while rainfall amounts average just over 3.5 inches for the month.

See the race route map for the Women’s Half Marathon Nashville here.

To reserve your spot in the early fall 2014 running of Nashville’s Women’s Half Marathon or Women’s Running 5K race, register online at the event website here.

Ever run in the Women’s Running Nashville Half Marathon? Share your impressions here, or post your review in the Comments box below.