Republic of Texas Half Marathon & 5K

Set for its 12th annual running this year, the Republic of Texas Half Marathon & 5K (called the Armadillo Dash before 2016) brings out between 2,500 and 3,000 runners each year in both races combined to the streets of College Station, the home of the “Aggies” and Texas A&M University.


Run along an out-and-back course that begins and ends at the university’s George Bush Presidential Library & Museum, the race takes runners through the university campus and through some of the surrounding neighborhoods.

The event is the brainchild of local running enthusiast and event organizer Jennifer Friedman, who had moved to Texas three years prior to starting the event and noticed that the city didn’t have any half-marathon events on its local road racing calendar, and in fact hadn’t staged a 13.1-mile running event in over a decade.

She wanted to brand the event with a name that would evoke a sense of place, and named it after the rodent seen so often along the side of the road in the southwestern part of the country.

The course for the race takes runners along roads that lie on the A&M campus, which gives the city its strong identity as “Aggieland” and is the alma mater of famous country singers like Lyle Lovett and Robert Earl Keen (one of whose more well-known songs, appropriately enough, is “Armadillo Highway”).

Much of the course takes runners through Texas A&M University, passing such landmarks as Kyle Field and the Quad before leaving the campus and spending the middle portion of the race running a loop through nearby residential neighborhoods.

There are a few hills along the course, however, most notably between miles 7 and 9, and runners in the past have experienced some windy conditions in the last two to three miles of the course toward the finish, which take runners from the bottom section of the loop course onto Highway 6 and then onto Harvey Road. (Note: this description details a previous course.)

Other than those few hilly stretches, the rest of the course is “pancake flat,” as one past participant described it. 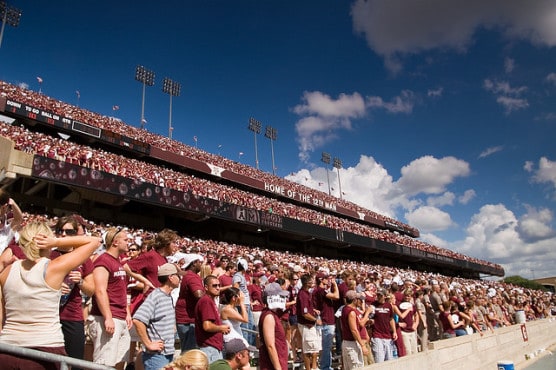 Late winter weather conditions are usually mild to moderately cool in College Station, located about 80 miles northwest of Houston, in the land between the Brazos and the Navasota Rivers. February is the city’s second-driest month of the year, and has brought record temperatures as low as 14ºF (in 1985) and as high as 99ºF (in 1996).

See the race route map for the Republic of Texas Run Half Marathon here.

To reserve your spot in the 2018 Republic of Texas Half Marathon, register online at Active.com here.

Ever run in the Republic of Texas Half Marathon? Share your impressions here, or post your review in the Comments below.