Set for its 11th annual running this year, the Baylor Scott & White Health BCS Marathon & Half Marathon takes runners on a winding tour of the home of the “Aggies,” through the campus of Texas A&M University and a series of local parks and shaded neighborhood streets in College Station.

Largely fast and flat thanks to its location in the part of Texas known as Brazos Valley, in the heart of what’s also known as the Texas Triangle – the mega-region that includes Houston, Dallas and San Antonio – the course through College Station and nearby Bryan shows off much of the campus and the city of more than 100,000 has to offer.

Runners and walkers – the race features a 6 1/2-hour time limit, so you can participate as either, as long as you can keep a pace of 15 minutes per mile or better – start the race along Holleman Drive near Post Oak Mall and the Wolf Pen Creek Amphitheater.

From there, the roughly loop-shaped route winds through the A&M campus as well as many nearby neighborhoods, unfolding past local city parks like Wolf Pen Creek Park and the A&M campus golf course, as well as the university’s Quad, the Forsyth Galleries and the Rudder Fountain, all of which lie in the heart of campus.

The hilliest portion of the half marathon occurs in the second half of the race, between about miles 7 and 10, though the final couple miles of the race feature a mostly downhill trek into the finish line.

For runners in the full marathon, the course is USATF-certified and it is also a Boston Marathon qualifying course, so you’ll be able to use your times here to apply for entry into the Boston Marathon. 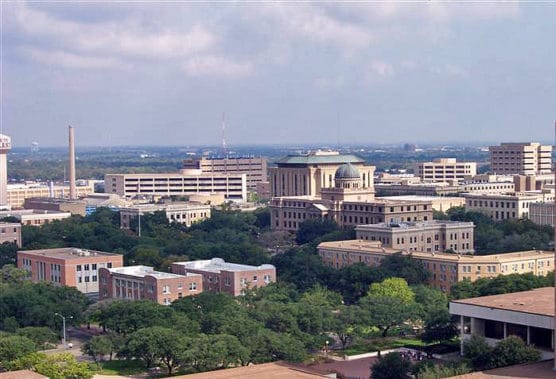 Like much of Texas, College Station experiences cool weather in December, particularly in the mornings. December temperatures have ranged as low as 2°F (1989) and as high as 86°F (1995).

See the race route map for the BCS Half Marathon here.

To reserve your spot in the 2022 running of College Station’s BCS Marathon or Half Marathon race, register online at RaceRoster.com here.

Ever run in the BCS Marathon or Half Marathon? Share your impressions here, or post your review in the Comments below.