Around 2,000 runners cross the finish line each year at the annual spring running of the Bearathon Half Marathon & Sic ‘Em 6K, for a race that takes runners from the stately, tree-lined campus of Waco’s Baylor University on a tour of the city along the Brazos River.

During the course of the race, runners cross a pair of bridges and make their way into Cameron Park, whose more than 400 acres of forests and river bottomlands overlook the waters of both the Brazos and the Bosque Rivers, which meet near the northern edge of the park.

Following a circuitous out-and-back loop through the city and the park, the 13.1-mile course for the race starts at McLane Stadium, along the banks of the Brazos River on South MLK Jr. Boulevard. After a quick run across the river, runners embark out onto 5th Avenue heading southeast, and make their first turn left onto Bagby.

Runners then follow the course up along Bagby and then left onto University Parks Drive, which they take for a long straightaway for the next couple of miles until they reach Washington Avenue and the Waco Steel Bridge.

The course crosses the bridge to the right here, taking runners over onto the northern side of the Brazos and along the riverside park areas just below Martin Luther King Jr. Boulevard.

There is the half-way turnaround point, and once runners reach it they begin their trek back toward the finish along much of the course they’ve just run. Participants should note that the organizers seek to make this race as environmentally responsible as possible by promoting a cup-free event — you can learn more here.

Organizers added a 5K (now a Sic ’em 6K) run for the first time in 2009 to the race they bill as “the hardest half-marathon in the state of Texas.” We’d be interested to hear from those who’ve run the race — as well as those who’ve run other halfs around Texas — how does that claim hold up? 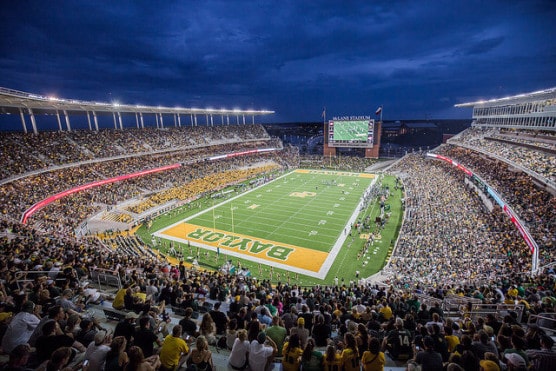 Baylor University’s McLane Stadium, where the race finish line for 2015 will be. (Photo by Idibri/flickr)

Moderately warm to mild and even cool weather conditions, with occasional rain, are the norm in the springtime in the town of Waco, which lies about 80 miles south of the Dallas-Fort Worth metropolitan area.

See the race route map for the Bearathon Half Marathon here.

To reserve your spot in the spring 2023 running of Baylor’s Bearathon Half Marathon or 6K race, register online at the official website below.

Ever run in the Bearathon Half Marathon? Share your impressions here, or post your review in the Comments below.