Note: This race has been cancelled.

Timed to coincide with what is perhaps the city’s most attractive season for visitors, the Big “D” Texas Marathon & Half Marathon takes runners on a course that shows off the Dallas metropolitan area in all its spring splendor, when the local trees, foliage and flowering plants are in full bloom.


The out-and-back race, which saw more than 2,200 runners cross the finish line in 2016 — including more than 1,650 runners in the half marathon alone — starts and finishes at the city’s fairgrounds for the State Fair of Texas, near the site of the famous Cotton Bowl, and features a tour of downtown neighborhoods, urban parks and White Rock Lake, a mecca for fishers, bikers, walkers, runners and boaters from around the local area.

Starting at the fairgrounds — also called Fair Park — the 13.1-mile course for the half marathon takes runners along the same course run by the full marathoners for the first four miles, taking runners from the start on First Avenue along a long straightaway along Lindsay Avenue, and then onto Tenison Memorial, West Shore Drive, White Rock Road and Winstead Drive before hitting the turn at White Rock Lake, where those running the half split off from those running the full 26.2-mile event.

Runners stay close to the lake’s shoreline for the next couple of miles, running along Shore Fish Hatchery, White Rock Road and West Lawther Drive before meeting up with an off-road trail.

Staying on this trail for the next stretch, runners then re-join West Lawther and then turn onto the Santa Fe Trail, which they’ll follow for the next four miles as they head back from White Rock Lake Park toward the fairgrounds in the second half of the race.

The field finally reaches the finish line inside the park at the Cotton Bowl Plaza, after first running along Bank Street, Washington Street, Pennsylvania Avenue and First Street, and then heading into the area in front of the famed football stadium — the home stadium of the annual BCS Cotton Bowl Classic as well as the “Red River Rivalry” college football game between the University of Texas and the University of Oklahoma.

The start and finish lines aren’t the only place along the course where there’s plenty of scenery, however.

The art deco architecture of the Fair Park grounds set the tone for the start of the race, but the neighborhoods through which you run are just as impressive. And though runners will experience a few hills at the start of the race, especially between miles 1 and 3, much of the rest of the course is either flat or features rolling downhill stretches. 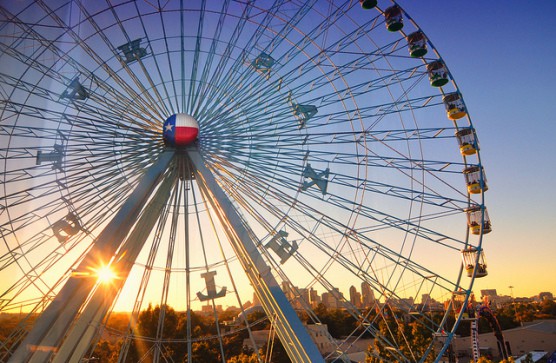 The State Fair of Texas fairgrounds in Dallas, Texas. (Photo by Robert Hensley/flickr)

Mild weather conditions, with occasional wet weather, are the norm in the Dallas metro area in the late spring season, as March temperatures have seen records as low as 12 degrees (in 1948) and as high as 97 degrees (in 1974).

See the race route map for the Big D Half Marathon here.

To reserve your spot in the spring 2018 running of Dallas’s Big D Texas Marathon, Half Marathon or 5K race, register online at mellew.com here.

Ever run in the Big D Texas Half Marathon? Share your impressions here, or post your review in the Comments box below.