Run through the city streets and urban parks of the western half of the Dallas-Fort Worth metropolitan area, Fort Worth’s “The Cowtown” road races are a veritable six-ring circus of running events, including a full marathon, half marathon, 10K, and 5K races for both kids and adults.

The race even includes a 31.068-mile ultra-marathon, which adds nearly an extra five miles through the city’s Trinity and Heritage Parks as well as a stretch along the west fork of the Trinity River before finishing up with the rest of the field at the Main Street finish line.

The course for the half starts just a stone’s throw away from the finish line, along Grady Street next to the Will Rogers Memorial Center, which lies near Fort Worth’s Trinity Park along the river. From there, runners head out into the park and then northward into the north side of the city, through the Linwood, Crestwood and Belmont Terrace neighborhoods.

With the exception of a few rolling hills, the course is largely fast and flat through the first half of the 13.1-mile route, which reaches its mid-way point at the city’s Fort Worth Stockyards Historic District, which commemorates this “cow town’s” connection to the livestock industry in Texas, and features a museum, vintage railroad and Texas Cowboy Hall of Fame in addition to rodeos throughout the year, as well as dining and shopping year-round.

Once runners make it past the historic stockyards district, they begin heading southward along Niles City Boulevard and then along North Main Street, where they follow a long straightaway stretch for roughly three miles. After crossing the bridge over the river, runners pass the mile 9 marker near the Tarrant County Courthouse and hit what is probably the half marathon route’s steepest hill, halfway between the mile 9 and 10 markers.

The course then flattens out again for the next couple of miles as it brings runners south and west along Houston Street and Lancaster Avenue, respectively, on the way back toward the Will Rogers Center for the race finish.

More than 8,000 runners come out to cross the finish line each year in the full marathon, ultra marathon and half marathon combined, including more than 6,000 finishers in the half marathon alone. 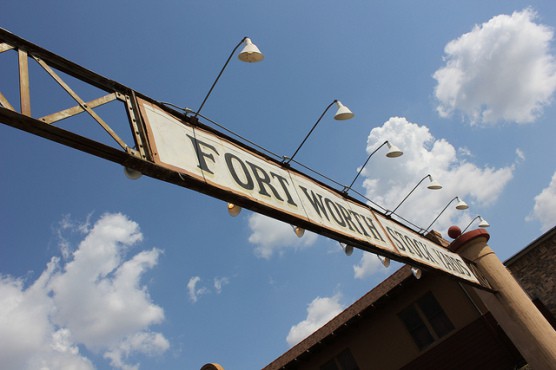 Known for its often sweltering hot summers, the city of Fort Worth thankfully sees much milder weather conditions in the late winter months, with average monthly temperatures in February that range between 36°F and 61°F.

Precipitation amounts are relatively low compared to the rest of the year, as the month brings an average of about 2.6 inches of rainfall. On the day of the race (February 26), the average low is 39°F and the average high is 63°F.

See the race route map for the Cowtown Half Marathon here.

To reserve your spot in the spring 2023 running of Fort Worth’s Cowtown Marathon, Half Marathon or Ultra Marathon race, register online at Raceroster.com here.

Ever run in the Cowtown Half Marathon? Share your impressions here, or post your review in the Comments box below.