Organized by the Morale, Welfare and Recreation program office at Texas’s Fort Bliss as part of its annual Fitness Resolution program, the Fort Bliss Half Marathon is open to active duty military, retired military and non-military runners, as a kickoff to the running and fitness season.


The race is set to take runners on an out-and-back course that starts and finishes on the base at the Soto Gym, which lies along Constitution Avenue here just outside El Paso, along the Texas-New Mexico border.

Runners in the half marathon must be pre-registered before race day; however, runners and walkers in the 5K may sign up on the day of the race. Following the half marathon, organizers will also host an “aerobathon,” a demonstration of the wealth of fitness activities, classes and opportunities available on the base. 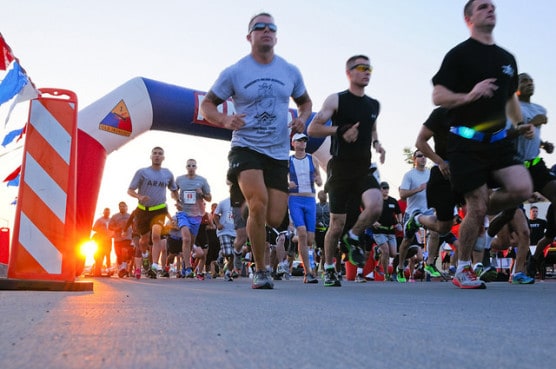 Runners take off from the starting line at the Commander’s Cup Aquathon in Fort Bliss, Texas, in July 2014. (Photo by Sgt. James Avery/U.S. Army/flickr)

Located near the border between Texas and New Mexico (and between the U.S. and Mexico), Fort Bliss lies about seven miles to the northeast of El Paso, which typically sees January temperatures that average between 58°F and 33°F, while precipitation amounts average less than half an inch for the month.

See the race route map for the Fort Bliss Half Marathon here.

To reserve your spot in the winter 2016 running of the Fort Bliss Half Marathon or 5K Run/Walk, register online at RaceRoster.com here.

Ever run in the Fort Bliss Half Marathon? Share your impressions here, or post your review in the Comments area below.